You Think You Can Order From The Deli Counter? Come Back When You’ve Got More Badges 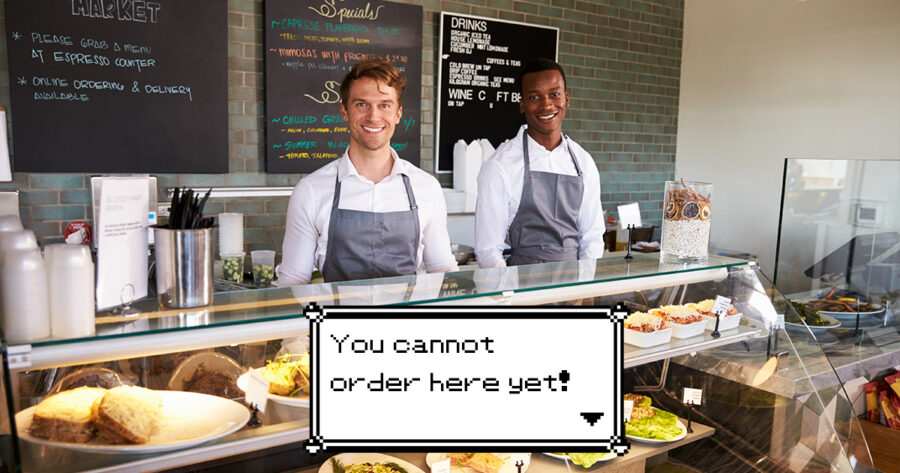 Huh? Did I hear something? Oh, it’s you. I didn’t notice you down there, pipsqueak. I bet you think you can just waltz up here and collect some of this store’s fine selection of deli meats, cheeses, and prepared salads, huh? Well, forget it! I’m not serving up my wares to some chump who hasn’t even collected six badges!

That’s right. The Great Deli Worker Tad doesn’t turn on the meat slicer for just anyone, especially not for a nobody like you. You haven’t even visited the other great grocery kingdoms and claimed their badges! If you were to visit the MEAT, SEAFOOD, BREAD, DAIRY, DRY CEREAL, and BOTTLED WATER & SODA kingdoms and proved yourself to be a true customer, then we’ll talk.

What’s that? Oh, that’s just my precious NUMBER DISPENSER. Do NOT touch it! A moron like you would never be able to figure out how to use it. So just forget it!!

You’re still here? I don’t know what kinda talkin’ tree or Grocery Professor told you to talk to me, but I ain’t budging. The only way you’re getting to these BOARS HEAD and STORE BRAND deli products is by obtaining six badges! But a kid like you would never be able to accomplish a task like that. You haven’t even equipped a SHOPPING CART and GROCERY LIST.

Hey! What did I say about my NUMBER DISPENSER? I thought I told you NOT to touch it! It’s very precious to me. I can’t have kids like you putting their sticky fingers all over it.

Look, kid. I can see you’re very insistent about ordering from the deli counter. So you know what? I’m gonna be a pal. Even though you’re a shrimp who can’t even collect six badges from the MEAT, SEAFOOD, BREAD, DAIRY, DRY CEREAL, and BOTTLED WATER & SODA kingdoms, I’ll let you order for a mere $1,000,000. Do we have a deal? I didn’t think so! Now go get those badges!

And remember: if there’s one thing I know about eatin’ sandwiches — and I know a lot about that — it’s that you can SAVE your GAME by pressing START to open the MENU.