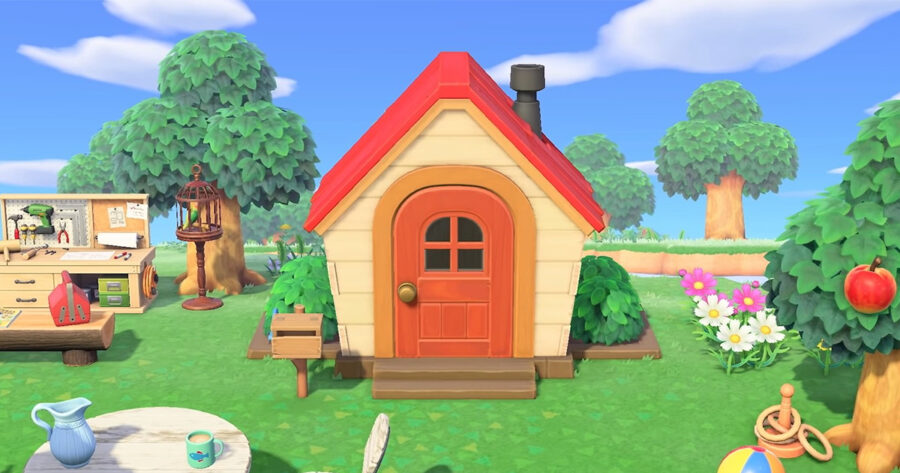 DESERTED ISLAND — Shaking as he described the terrors that might lie inside, local island resident Lobo warned a group of children that no one had been seen emerging from the spooky house they were playing in front of in over 11 months.

“The last person to go in there was a human boy, about your age,” said Lobo to the children, his voice quivering with abject fear as dark clouds formed behind the house and lightning struck in the distance. “Day after day he would come out to work, fish, buy furniture, sell bugs, landscape, pay off his mortgage, and destroy rocks. We all loved him. Then one fateful day, he went into that house for the last time, and was never seen again.”

Neighbors confirm that the biggest house in the village has been quiet for nearly a year, and its resident, a wealthy young man named of unknown origin who was once a pillar of the community, has not been seen since. His disappearance into the island’s only mansion has captured the imagination of children and adults alike, his entire existence becoming urban legend.

“Some say he moved away in the night,” continued Lobo, lit only by the blinking blue light of an overflowing mailbox. “Some say he died in that house, his body eaten alive by roaches, and that he now haunts these grounds. Like Wisp except evil. Me? I can’t say for sure, but every time I walk by that house, a chill falls over me. Some days I think I see a pallid figure standing in the window for a brief moment. No, I think he’s still in there. Watching. Waiting.”

Fueling some of the town’s superstition is how the man’s disappearance seemed to coincide with the rapid degradation of the islanders’ quality of life. Weeds soon consumed vast swaths of inland areas, the island rating plummeted to the lowest possible score, the economy collapsed, the sky eventually grew dark as presents attached to unpopped balloons began to block out the sun, Dodo Airlines flights have vanished into the fog, and K.K. Slider may never come back.

“That house is an omen,” Lobo concluded. “We all should be scared of disturbing whatever forces lay dormant there if President Nook’s Happy Home Academy still plans on demolishing the building.”