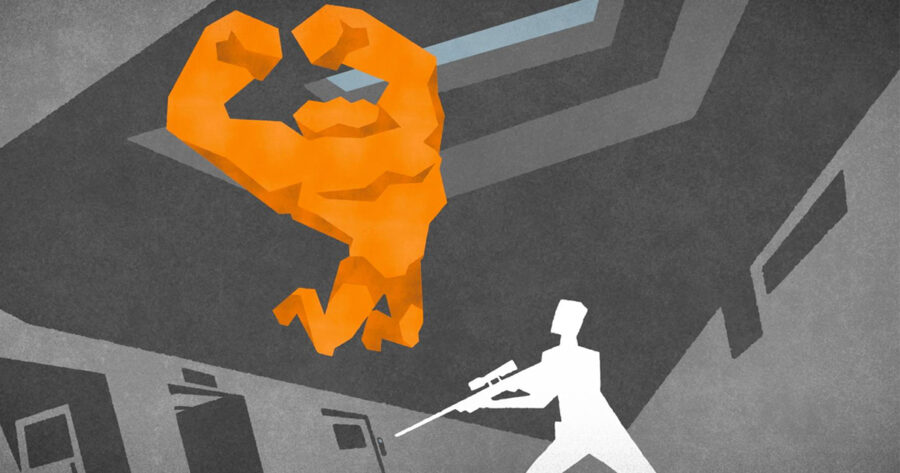 Today we look back on a personal favorite indie release of ours: Ape Out. Well it’s three years later and we can safely say that, while many have tried, nothing has quite captured the sheer thrill of bopping around and just terrorizing every damn last security guard you see all while one of the best soundtracks you’ll ever hear in a video game literally responds to your actions onscreen.

Still don’t believe us? Okay, fine. Let’s take a look at the competition and figure what is definitively the #1 game in the esteemed Beat-Up-A-Bunch-Of-Cops-As-An-Ape genre.

Ape Escape — Absolutely crucial as fuck in the lineage of ape games, but nary an authority figure in sight to pummel and no jazz soundtrack that is literally orchestrated by your violence. Ape Out gets the nod here, based on the criteria at hand.

The Animals — Naughty Dog’s emotional action/adventure game had a lot of people thinking it might unseat Ape Out when it was released, but while the narrative was well written and the combat absolutely exquisite, there was no sick-ass jazz drumming soundtrack, so that really sets it back a few notches. While many lauded the exclusion of one of the fundamental aspects of the genre, an innovation akin to Samus Aran being able to move in either direction at the beginning of Metroid, I personally missed the cool drums. (By the way; the fucking humans are the real “animals”! Whoa!)

An Ape Plays Jazz Drums — This one is so close, yet so far. Honestly, it’s insane that this was also a video game. Ape stuff, check. Jazz drums, check. But the thing is: here you’re not an ape running around just fucking throwing guys into other guys and knocking motherfuckers out and blowing shit up and then sometimes you grab one guy and use him as a human shield and he’s still shooting his gun so he starts fucking shooting the other guys that are shooting at you and then you throw the human shield against the wall and it explodes. No, you are just a young ape named Sherman trying to learn jazz drums in time for the big recital at the end of the week. It’s fun and charming, just a little underwhelming post-Ape Out.

Cabela’s Big Game Hunter Presents: Ape’s Revenge — Honestly, this one rips. But using a shotgun to mow down hunters while Ted Nugent songs play isn’t nearly as graceful an experience as teeing off on half a dozen cops at once like Jackie Chan in his prime while the jazz drum soundtrack being generated perfectly scores the action on-screen.

Halo 2 — This massive sequel to 2001’s Halo sees Master Chief and the Arbiter battling it out with the genocidal Covenant in an effort to save humanity and is one of the most popular video games of all time. However, you do not play as a single ape, there’s no jazz music, and you don’t battle it out with any cops.

Well, there you have it. Ape Out is still at the top of the mountain. There hasn’t been a game before or since this groundbreaking 2019 masterpiece that has synergized fluid controls, gorgeous presentation, an innovative premise, and an immersive soundtrack anywhere near as well as this. Or maybe there has been, I don’t fuckin’ know. I’ve been playing Ape Out.

As you may have been able to tell, this article was sponsored by Devolver Digital! If you don’t agree with our argument in this article, we recommend you check out Ape Out and decide for yourself, damn it. It’s 75% off on Steam right friggin now and you can get it for less than $4. Go ahead, try to find a better deal on a classic Beat-Up-A-Bunch-Of-Cops-As-An-Ape game.