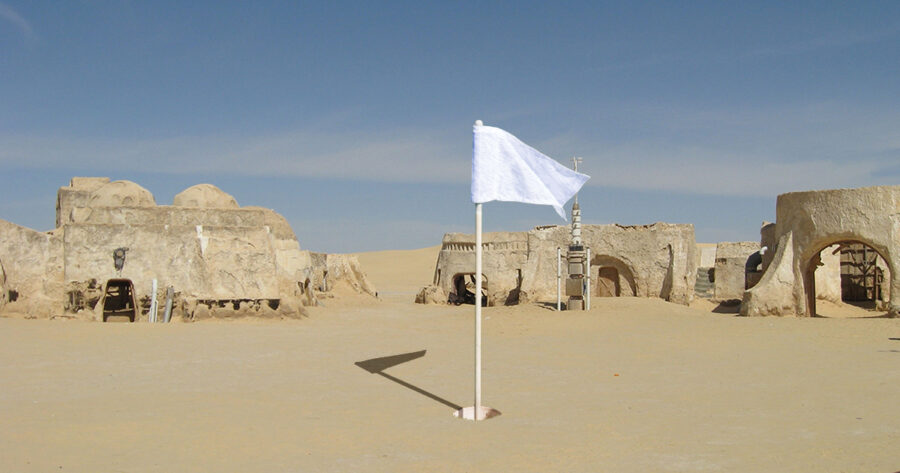 TATOOINE, O.R.T. — The sand planet Tatooine cut the ribbon on a new golf course that is already facing unanimous criticism from the community.

Lin Cardor, a moisture farmer and Tatooine native, gave his disapproval of the new members-only course, citing some climate issues.

“It’s a fucking sand planet,” Cardor said. “Sand. Everywhere. The fairway? Sand. The green? Sand. The sand traps? You guessed it: sand. I’ve played every golf course they’ve ever built here and they all just suck. You’d think a planet like this would be more into something like beach volleyball, but nope, we’re apparently all-in on golf.”

The professional golf scene of the Outer Rim Territories has also voiced criticism, noting many hazards to the course not seen on other planets.

“Sure, my caddy loved the course at first because he only had to carry one club,” said Dash Leno, a member of the Galactic Golf Tour. “Then he was eaten alive by a krayt dragon and my club was stolen by Jawas. It’s hard enough golfing with two suns in your eyes, but this is out of control.

Rix Thalcorr, the owner and proprietor of the course, dismissed the complaints.

“The difficulty is by design. Things are adjusted accordingly,” Thalcorr said. “For instance, the first hole is above the usual stroke count, with a par of 46. We’ve also tweaked the rules a bit. Having your caddy or ball eaten by a sandworm is a standard two-stroke penalty.”

At press time, the golf course was quickly shut down by an unknown figure high up within the Empire. Sources close to the information say that the anonymous figure told subordinates that they “don’t like sand,” citing the fact that it is coarse, rough, irritating, and “gets everywhere.” The source however cut out after this, seemingly making choking noises right before.