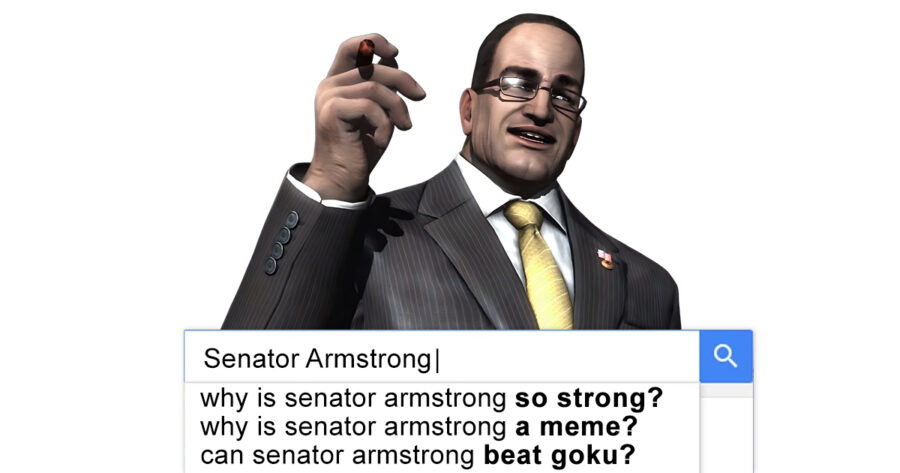 We had the pleasure of sitting down with Colorado Senator and former presidential candidate Steven Armstrong and asking him to answer some of the questions you have been looking up about him on the internet.

Google: Why is Senator Armstrong… so strong?

Armstrong: Why is the rest of our government so weak? I’ll tell you why, son. Because none of these withering husks in power believe in anything!

You wanna know why I’m strong? You wanna peep how I rose to power? Because I promised action and I delivered action. Now… those actions may have resulted in some deaths, maybe 8,000 or so, but who’s counting? That’s besides the point.

Well, that and nanomachines. They harden the goods, ya know!

Google: Why is Senator Armstrong… a meme?

Armstrong: That’s actually an interesting one. You see, the original definition of “meme” as coined by brilliant evolutionary biologist and eugenics apologist Richard Dawkins refers to a “gene” passed through culture and conversation. I fought Jack for all of half an hour, but what I told him changed the course of his life forever. So my meme, in the strictest sense, persists because I am an idea you nerds can not shake.

Armstrong: Then I’m not autocompleting your questions for shit. Keep ’em moving.

Armstrong: Actually. Why the hell are we using Google anyway? These tech companies are harvesting our data to sell us back shit we don’t need, weaponizing the illusion of free choice against us. This question is inane. Nobody asks this. It was generated to sell Funko Pops. No more Google! Give me a real search engine. One fit for someone of my stature.

DuckDuckGo: Can Senator Armstrong… back that up with a source?

Armstrong: I am the source!

You can’t trust any “citation” on the internet these days. You make your own answers; you forge your own rules. A couple of years ago, some limp-dick fossils tried to call this sort of philosophy “alternative facts” — but they were being dishonest. They’re not alternative; they’re SELF-DEFINED! Don’t let the culture police take your truth from you! You came up with your reality, so the rights to it are yours. Begone, DuckDuckGo!

Yahoo: How is Senator Armstrong… the bad guy?

Armstrong: Hah! More propaganda! What do you think this is, some Aesop’s fable? There are no “good” or “bad” guys. Sure, I might have tried to steal children’s brains and start a war in Pakistan. And sure, I may have said we should kill any leftover kids once the brain lab was full. But I think we’re missing the bigger picture here: I did it for the economy! Every politician does it! Just because I got caught, you’re going to cancel me for it?

I have to be honest, gentlemen: I really feel like cancel culture has gone too far. These autocompletes are lying to you for brownie points. There’s only one website we can trust anymore. The last great American frontier: Reddit.

Armstrong: Waste of my time…

[Armstrong then absorbed the soul of a nearby cameraman, hardening his arm into a spear with nanomachines, and murdering everyone involved in the production of this video, before walking off set.]

Who should we interview next? Andrew Ryan from Bioshock? Drop a comment below!