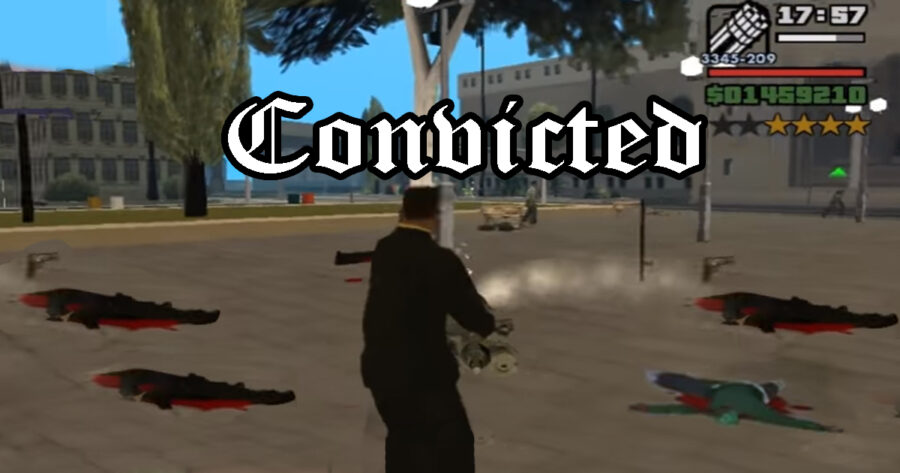 LOS SANTOS, S.A. — Carl “CJ” Johnson, who is being tried for killing 126,000 civilians in a single afternoon last year, has been found guilty on all charges. The shocking killing spree ended after an exhaustive police chase that lasted over 3 hours and claimed the lives of over 20,000 police officers.

“It was horrific. The guy literally shot down four helicopters from his car with a damn handgun,” said Los Santos Police Captain A.P. Jones.  “I have no fucking idea how he did it but I swear at one point, he made a tank appear out of thin air floating about 20 feet above the ground and he dropped it onto a group of civilians. This guy is a one-man plague; killing those people was like a game to him.”

The confirmed death toll more than doubles that of the Vice City massacre which took place in 1986, making it the deadliest event in recorded history.  Aside from the massive amount of fatalities, property damage is estimated at over one billion dollars.

Some anti-gun activists blame the tragedy on the current gun laws that allow San Andreas citizens to purchase a wide array of weapons including explosives, anti-aircraft guns, and hammers.  The popular weapons franchise Ammu-Nation has since been targeted by protesters at almost all of their 306 locations in the city.

“We need to arm every single San Andreas citizen with their own rocket launchers and infinite money. That’s the only way to stop this kind of madness,” said a spokesperson for Ammu-Nation.

The defendant will be sentenced later in the week.  His defense attorney, having failed to get the charges reduced to 126,000 cases of vehicular manslaughter, has asked for the judge’s leniency.