Review: I Didn’t Want to Spend $15 So Here’s Five Things WRONG with the ‘Free Guy’ Poster in the Lobby 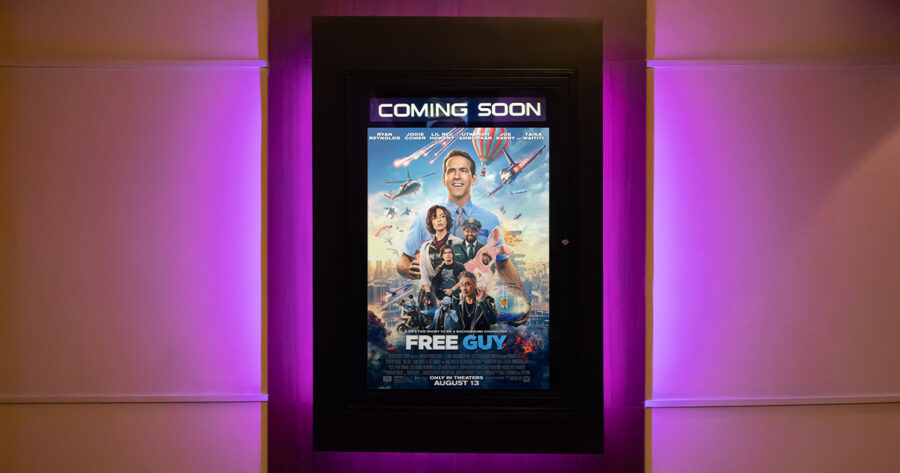 The movies are finally back. We’ve all longed for the day when cinema would return, and it feels so great to go to theaters again. That said, movie prices are also back. I don’t care how charming or quirky Ryan Reynolds is, it can’t be worth fifteen dollars. So instead of nestling into my seat and watching the latest action comedy, I stayed in the lobby nitpicking the poster, and boy, are there some huge plot holes and issues with this thin sheet of paper. Here are five things WRONG with the ‘Free Guy’ poster in the lobby.

1. It Gives Away Too Much

When I go see a film, I like to go in completely blind. Everyone knows modern trailers give away far too much about the movie, but I also think posters do too. After looking at the ‘Free Guy’ poster for almost three hours until the AMC staff asked me to leave, I have a lot of the movie spoiled for me. I not only know Ryan Reynolds will be in this movie from his appearance in the poster, but now I know huge spoilers like when the movie is being released, who wrote the screenplay, and that the AMC staff can be kind of mean sometimes.

2. It Has No Rewatchability

Something I want in a film is to pick up different lines, jokes, and Easter Eggs upon multiple viewings. Unfortunately with the Free Guy poster, I felt like I was able to take it in after the three hours in the lobby and the subsequent five hours I spent peering through the AMC doors until I was chased away by a homeless man. Movies like Donnie Darko and The Shining have hints and elements that I’m still gleaning to this day, but I can’t help but feel the Free Guy poster felt a little two dimensional after 8 hours of analysis.

3. It Doesn’t Hold Up Later

After looking at the poster for a while, I really thought I liked it. The next day I went and begged on my hands and knees to the 17-year-old manager of the movie theater if I could take my beloved poster home so that we could be wed, but I was refused. After smashing the glass and returning it to my home, I started to notice some tears and stains in the poster that I didn’t initially catch, and I’ve concluded that it doesn’t really hold up by today’s standards, especially when you factor in the crutch if needing tape to stay on my wall.

I love waiting around until after the movie ends to see a quirky postscript or funny cameo, but after my poster watching concluded, the only thing that happened was that I was assaulted by an AMC employee.

4.5 HONORABLE MENTION: I Was Assaulted By an AMC Employee

Not bad enough to make the list but I just thought I would say it again unless you missed it the first time.

5. Our Country Is In the Toilet

The biggest problem with the Free Guy poster is an issue on a much larger scale. Whether you’re a liberal or conservative, I think you have to agree that the Free Guy poster did nothing to change your point of view or make your life better. Sure, the poster is a fun 8+ hour experience, but after? You’re forced to return to your shitty, meaningless life and reckon with the downfall of a once shining beacon of democracy and freedom. I wish I could consider myself a ‘Free Guy,’ but I know that I am a slave to the giant grinding machine of capitalism and corporate greed.