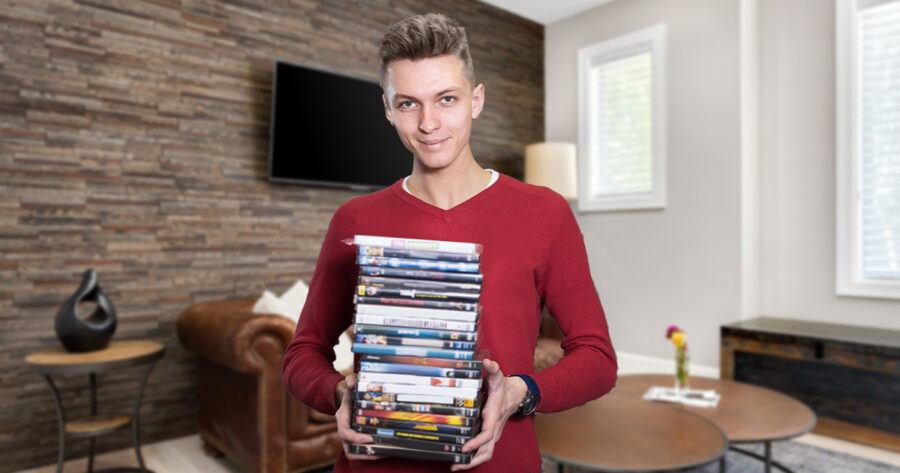 PORTLAND, Maine — Physical media collector Travis Hovey reportedly acts like he doesn’t care about news that the very expensive obscure cult film he purchased on blu-ray is available to stream on Tubi for free, sources confirm.

“Yeah sure, I can totally stream Night of the Cannibal Carnies on Tubi or whatever, but this version is the super limited steel box and was totally worth the $250 price tag,” Hovey explained. “Plus, you’re not getting the awesome extras on Tubi like you do with a physical copy. Can you get a commentary track from the guy who dry cleaned the director’s clothes during filming? I think not! You never know when these companies will just decide to delete a movie from history for some tax money, and then what? I can just never watch Night of the Cannibal Carnies again?! You’re the one out of your mind!”

Samantha Miller, Hovey’s partner, weighed  in on how much of a hassle her boyfriend’s interest can be.

“I know collecting is his thing, but to me it seems a bit unnecessary,” Miller said. “It seems like almost every movie Travis owns is online, free of charge. Whenever we check out a streaming service’s library, he tends to sit there with a sad, blank stare. I’ll say to him, ‘Oh, look! Video Violence is on here babe!’ and he’ll glance over at his $1,000 dollar VHS copy then stare at the floor for 30 minutes. I know a piece of him dies every time, but Tubi is just so damn convenient.”

According to those familiar with the situation, Tubi tries to have as many movies as possible available to stream for free.

“One time some guy cut me off in traffic, but he couldn’t see my car coming because his back window was covered by mountains of DVDs and Blu-rays. That’s when I decided to dedicate my life to destroying physical media collectors once and for all, launching Tubi,” explained Tubi CEO Farhad Massoudi. “The plan is to slowly grow our streaming library until we have every single obscure movie ever made, available for people to watch. Then, people start feeling like they can get rid of all those old physical copies of movies they have. Why not? It’s on Tubi, right? That’s when we strike, deleting the entire company from existence. I will have my revenge. Few people know this, but the name Tubi comes from the phrase, ‘to be continued.’”

At press time, Hovey was seen with a tear rolling down his face after seeing an album he paid $300 dollars for is streaming on YouTube.