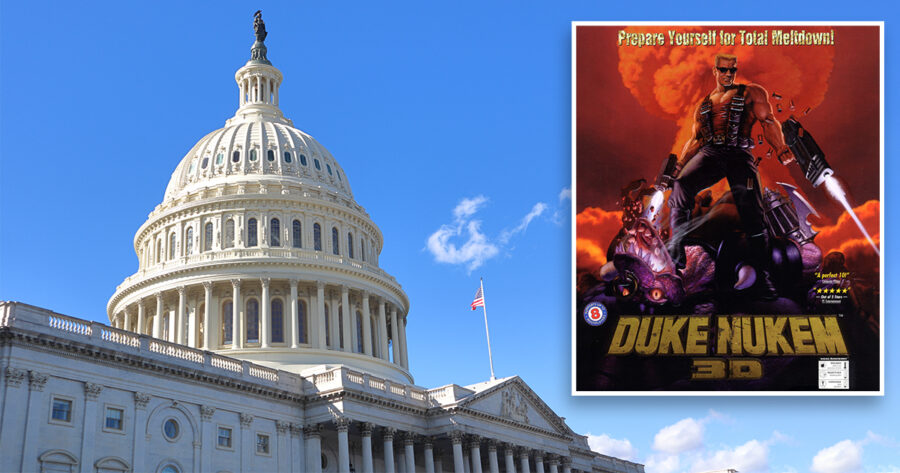 “These new three dimensional MS-DOS games are pushing today’s youth over the edge,” said United States Senator T.H. Weatherford. “And it couldn’t be easier for our children to get their hands on these things these days. All they have to do is get the America Online hours disk out of their parent’s mailbox, get online, and get onto any respectable shareware site. That’s it! That’s all these kids have to do to get their hands on this thing. It’s horrifying, and frankly we should have done something about it years ago.”

The creators of the game defended it against the most recent wave of attacks.

“Oh come on, we’ve been getting blamed for this stuff ever since the game came out,” Richard Gray, a level designer on the 1996 release. “Well actually, not ever since. Most people moved on and started blaming violence on things like mental health, doors, or at the very least Call of Duty or something. What world is this asshole living in where he’s still worried about Duke Nukem 3D?”

Gamers were largely outraged over the continued allegations of ties between video games and real life violence.

“First of all, they have these games all over the world, not just America,” said Laura Carlton, a local gamer. “And second of all, that game is 26 years old, I’ve never heard of it before this, and it sounds stupid as hell. How long are we going to keep blaming specific pieces of media for what is clearly an American problem? When are we going to finally start talking about the real problems we’re facing?”

As of press time, Senator Weatherford had introduced a motion to ban EverQuest from American servers due to its addictive grip on America’s youth.