Pokémon Legends: Arceus Is Exactly the Game Fans Begged For in Like 2011 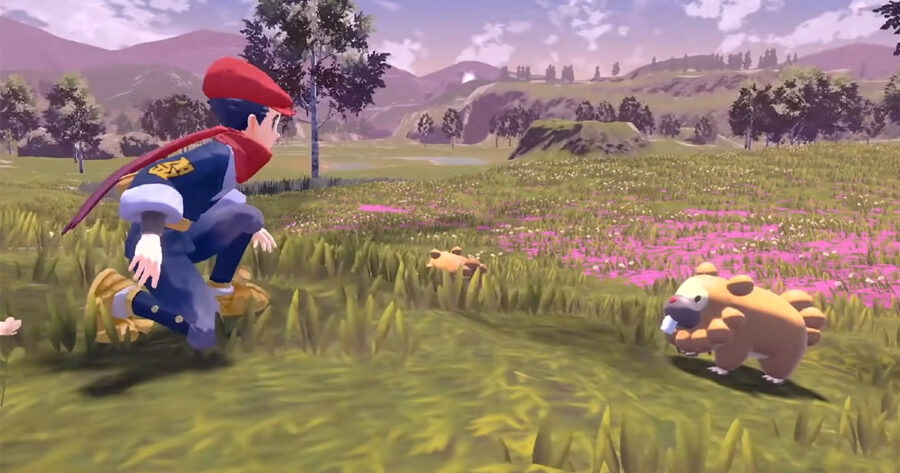 The internet has blown up with praise for Pokémon Legends: Arceus, Game Freak’s newest edition to the long-running Pokémon series, and arguably its best game to date. And you know what? They’re right! The hype is real; Pokémon Legends: Arceus is genuinely an incredibly fun experience and innovative new direction for the franchise. Which is really funny considering that it kind of really sucks.

In all the best and all the worst ways, Pokémon Legends: Arceus feels like someone made a really dope mod for Skyrim that lets you catch Pokémon (and didn’t immediately get taken out by Pokémon Company hitmen). It might be the most Nintendo Hired This Man game of all time, seemingly adapted from Reddit posts where people photoshopped Pikachu and a battle UI onto screenshots of Breath of the Wild.

Let’s start with the good. It’s a bit insane that it took so long for Game Freak to update the formula in this way. Pokémon fans are used to grading Game Freak on a curve; the series has basically been exactly the same since its debut in 1996, with each edition adding new monsters, (arguably) better graphics, some quality-of-life upgrades, and a slightly more linear path for players to walk along to the Elite Four. Really all they did is finally make good on the promise that Pokémon fans have imagined from the beginning: walking around and finding wild Pokémon to throw balls at until you catch them or battle them into submission.

And it’s fucking awesome. It’s like you’re actually in a Pokémon game! They like actually pulled off the dream of what a Pokémon game can be. And a whole bunch of the guys are in there. All your Pokémon pals from across the series are just hanging out and walking around, ready to party with you. (I should mention here that it’s not all of the Pokémon from the series). As a casual fan, this is the most fun I’ve had playing a Pokémon probably since I was an actual child, the age you’re supposed to be when you’re playing Pokémon.

Which is why it’s so funny that the game is otherwise pretty bad. Let’s get the obvious out of the way: whoa this game looks ugly. Graphics ultimately aren’t that big of a deal, and Sonic the Hedgehog told me that he wants shorter games with worse graphics made by people who are paid more to work less and he’s not kidding. And I agree, that sounds great.

But also… damn lol. That’s really how the game looks? For real, though? I know people love to compare this to Breath of the Wild and the argument is that Pokémon has a lot more guys running around on screen at once, but also I played Breath of the Wild on my Wii U gamepad in 2017. It is straight up jarring to see a Gyarados flying off in the distance, jittering around the screen with fewer frames than it did when it was in an actual sprite in Pokémon Silver or whatever. When I say that this is the game fans wanted in 2011, I mean that they were limited by how games looked in 2011. I’m not trying to be one of those guys who misunderstands how difficult it is to develop a video game, and I don’t want developers to crunch more at all, but it’s pretty crazy to think that this was made as part of the highest grossing media franchise ever.

I also sat down with this game with the idea that I would pay attention to the story. I’ll admit, I’ve struggled to care about what’s going on in a Pokémon game in the past; I could not tell you the name of a single character in Pokémon Sword with a gun to my head (a situation I expect to one day find myself in, without a doubt). I’m here to chew gum and collect little guys and I’m all out of energy to read through text because I work all day and I’m just trying to sit down on my couch at night, collect the little guys, and chew gum because I heard once in middle school that it’s technically good for your teeth.

I couldn’t do it, you guys. I couldn’t read all this text. I just don’t have it in me.

The way that Pokémon Legends: Arceus has you fill up the Pokédex is really clever and I thought that was fun, but I think it’s telling that everyone I’ve talked to about this game is like “I loved it! I hope they build a game around it next.” Because Pokémon Legends: Arceus isn’t really a full game. It’s just a list of admittedly very fun tasks to fulfill. And I agree: I do hope they make a game out of this concept! I think this would be really fun if they adapted this mobile game into a full-fledged Pokémon game. Nintendo, please hire me if you need an ideas guy because I’m fucking full of them. What if Pikachu was purple? Is anyone writing this down?!

The boss battles in this game have you throwing infinite berries at big yellow guys while Pokémon Legends: Arceus does a boring impression of Super Mario Odyssey. Which, now that I mention it, is probably closer to what this game feels like than Breath of the Wild. You go to different areas and interact with different enemies, and generally fuck around hanging out in the worlds they’ve built for you. Except in Odyssey, each world feels very unique and there’s all these cool little platforming challenges for you to bounce around. In Arceus, on the other hand, everything is pretty much a plain area with a different tiled texture over the ground (you can see the tiles, no joke lol). In Arceus the extent that you are “platforming” is that you yell at your Switch, begging it to explain to you which little barriers of dirt you can jump up onto and which you can’t (answer: it’s pretty much all of them.) Pokémon are finally dangerous in Pokémon Legends: Arceus, but so are rivers. Boy do you drown a lot in the first few hours of this game!

I don’t want to sound like I’m complaining that much. The game is fun. I’ve been having fun playing with it. I caught a shiny, so it’s automatically good. Shinx, by the way — seems to be fairly common. Hell, all shinies are more “common” in this game just due to the fact that you can see them walking around, which is incredibly cool and exciting. It’s the Pokémon game I dreamed of playing when I was a kid, playing Pokémon Yellow and watching my little Pikachu follow me around.

On that note, there’s a certain star power that Pokémon have that the franchise’s competitors can’t seem to figure out. Because there feels like so many things that Game Freak could do to easily make these games better, so why hasn’t anyone come along and just done it on their own? With a new franchise? They’ve tried, to be fair. For example, Temtem tried to be a Pokémon clone with all the quality-of-life upgrades that fans have begged for. I remember watching the trailer and promising myself I would try it out, but I never did, for some reason.

Playing Pokémon Legends: Arceus finally solidified why for me. Pokémon being the highest grossing franchise of all time isn’t just a random thing that happened by accident, it’s because we’ve all grown fond of these characters. When I see Pikachu walking around in the game now, it’s like spotting a celebrity. And Arceus really cleverly cashes in on that iconography by letting players roam a world filled with these encounters. It’s an exciting experience to turn a corner and see an alpha Snorlax sitting behind a big rock, ready to body slam you into oblivion. And by oblivion, I mean taking a knee and teleporting back to home base.

Ultimately, I’m excited to see what slop those Game Freaks cook up next for their hungry fans. Because I really am excited to slurp it down. We grade Pokémon games on a curve because they have one big thing that no other game series has: Pokémon. I hope one day when we’re out catching ‘em all, they’re catching up to the level of video games of the current year they are making them in. Or at least be less than a decade behind.