I’m Not Some Weirdo for Hoping Mario Kart 9 Has a Story, OK? 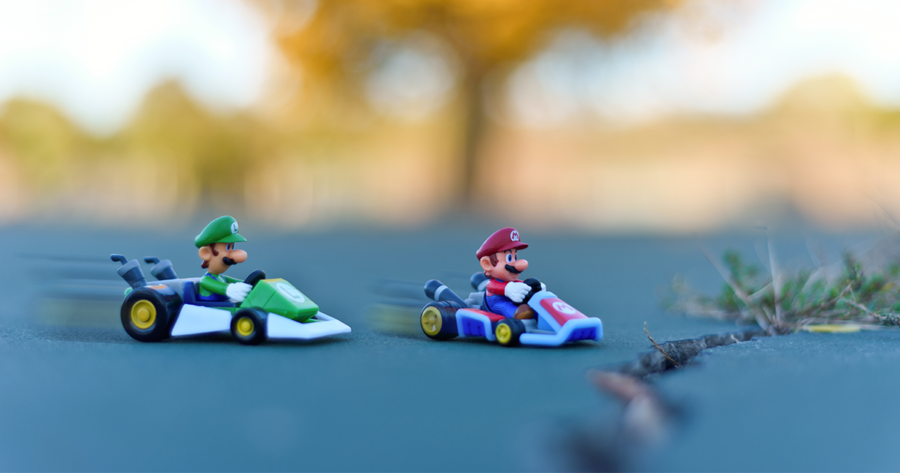 Many have attempted to edge in on the kart-racing genre that Mario and his friends defined, putting their beloved mascot characters behind the wheel and seeing them race around in circles, but few have succeeded in being little more than pathetic imitations. Mario may still be the King of Kart, but when Nintendo and Rare were nearly inseparable, they perfected the formula with Diddy Kong Racing, which had a wider variety of characters, courses, and vehicles. But most of all: it had a fucking Adventure Mode, with an actual story! At the risk of sounding like some kind of weirdo — Nintendo, we need a story mode in Mario Kart 9.

Following up from the wild success of Mario Kart 64, Diddy Kong Racing had to stand out on its own, and in doing so, added a number of new features including an adventure mode with an explorable hub world à la Super Mario 64. Complete with hidden secrets to find, bosses to fight, and special challenges to play, it was a breath of fresh air after spending countless hours going around and around Luigi’s Raceway in Mario Kart 64 with your friends (if you were lucky). You’d think after how good of a concept this was that Nintendo would take the idea and run (race?) with it, but nope, Mario’s just gonna do what he does best. Though there may be a reason behind this, and I blame Microsoft.

No I’m not some bitter fanboy, this is truly all Microsoft’s fault. Before the GameCube was released, Rare revealed a teaser trailer to a follow-up game tentatively titled Donkey Kong Racing. The brief glimpse showed new characters, additional vehicles, and more. Shortly after the GameCube was released, however, Rare was acquired by Microsoft, and the game was banished to the depths of development hell. While Nintendo kept custody of Donkey Kong and his Kong brethren, the game itself was Rare’s, and all was left behind so Rare could focus on Viva Piñata or something. So basically I’m really gonna need Mario to pick up the slack here.

Everyone knows exactly what to expect from Mario Kart now, and that ain’t good, especially in the eyes of Nintendo who feels the need to innovate on ideas that may feel trite or stale. We got a tiny taste of this in Mario Kart DS, which included mission modes and boss fights — something to shake it up from just racing on the same 4-track grand prixs and the general monotony of my everyday life. But they haven’t changed it up since. Dare I say, at the risk of sounding like some kind of freak: this is where a story mode would help.

Presentation can really go a long way, and something like a hub world or an area to explore may sound fucking stupid on paper, but it’s little moments like that which make games truly memorable. Diddy Kong Racing still had a versus mode just like Mario Kart, but it also had the “more” factor. The villain of Adventure Mode, Wizpig, has probably given me some mild form of PTSD, but hey at least I had a memorable experience. We need something just as traumatizing and/or memorable for Mario Kart 9, or whatever they decide to call it. Super Smash Bros. Brawl had a story mode — all those dope cutscenes from The Subspace Emissary may have even made tripping worth it — but Nintendo later opted to majorly strip it down for future games, which is also a shame.

The open-world sandbox format of games like Super Mario Odyssey and Bowser’s Fury have been a hit, so imagine racing your character around a large map where you can find secret raceways, hidden characters, and boss fights that are too big to fit into a simple race course. Is anyone else getting goosebumps? Just me? OK.

It’s not too late, Nintendo. You’re going to keep making Mario Kart games forever, because you have to. If you stopped, it would cause a great unbalancing of the universe, a shaking of the cosmic system that keeps our checks and balances in place. So if you’re forced to continue making these games as some form of ironic punishment for success, well, you might as well make ‘em interesting! No one is going to necessarily complain if you just add new courses and a few new characters each time, but someday, honest citizens are going to stand up and say: we want more. Today is that day, and I am that honest citizen. Give Mario Kart 9 a story mode, and please vouch for me that I am not some weird manchild for thinking about this so much.

After that, who knows what we can accomplish? Maybe a Pokémon game that looks like it was made in the year it came out.