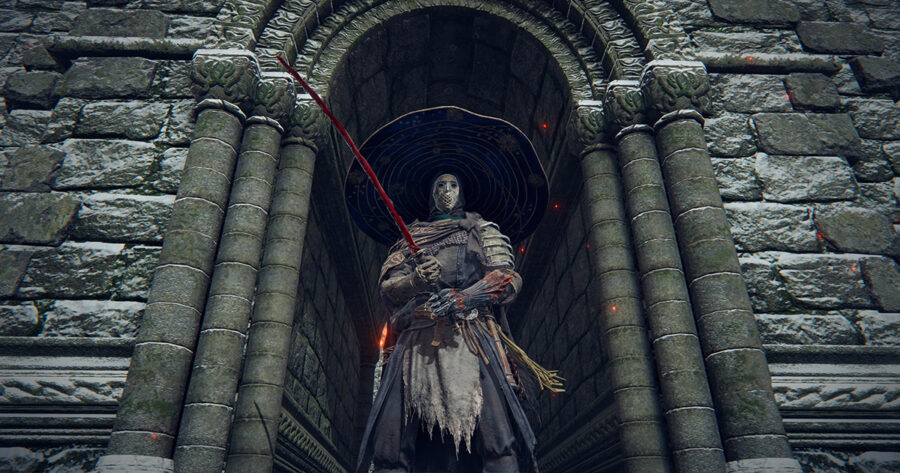 I am an unskilled gamer. My timing is bad. I button mash. I don’t have the patience to learn an enemy’s moves. I’m more likely to give up on a hard game than to finish it. And when I first started Elden Ring, I thought it was a hard game. I even wrote an article about it for esteemed satire site Hard Drive.

But it turns out I was wrong. After playing Elden Ring on and off for a few months—and getting no more skilled in the process—I have now beaten the game. It was easy. And if it was easy for me, it can be easy for almost anyone. I’ll tell you how.

You can look everything up.

Through the awesome power of looking it up, an unskilled gamer like me can craft a build that clears out the highest-level Elden Ring bosses in like, 45 seconds. In my case, all I needed was a grinding location, a special katana, some choice bell bearings, a specific summon, and a collection of talismans. Crafting this build took me across the Lands Between, through much of the main storyline, and into some dope side quests, too. I experienced this perfect game in all its glory, and it got easier and easier the whole way. Because—and I cannot stress this enough—I used the massive collection of information gathered by gaming journalists and wiki editors, available free at any time, for help at every step.

Elden Ring doesn’t need an easy mode. It’s already as easy as you want it to be.

Of course, there are scolds who think looking it up is cheating. These are people who, deep down, wish Elden Ring did have an easy mode. Because without a lower difficulty setting, there’s no objective separation between these players and anyone else playing Elden Ring—even the button mashers like me. There’s nobody for them to look down on. We are all equal in Hidetaka Miyazaki’s eyes.

For some gamers, that’s a tough pill to swallow. They need a hierarchy. So, they resort to making up a set of rules—one that conveniently maps onto however they play the game. If they don’t use the wiki, the wiki is cheating. If they don’t use the Mimic Tear, the Mimic Tear is cheating. They are guided by the feeling that what they’re doing is more real, more vital than what other people are doing. We all feel that way sometimes. So, hey, more power to them. That’s fine. But I don’t have to care.

Think my Rivers of Blood bleed build + maxed out Mimic Tear is cheating? Okay. Don’t care. Think using the IGN walkthrough is lazy? That’s cool. Don’t care. And because we’re playing the same game, on the same difficulty, watching the same credits when we finally triumph, I don’t have to care. Because we’re the same, you and me. Except I’m not on Reddit.

But you know what? It’s not even about that. What makes Elden Ring so easy, ultimately, has nothing to do with difficulty settings, or grinding, or i-frames, or whatever else. Elden Ring is easy because it’s a video game. And in video games, you are always improving. You are always moving forward, gaining power, vanquishing foes who once seemed untouchable. You are never truly stuck. You are never helpless. You are not living in a loop of work and sleep, grinding out runes that mostly go to the bosses, making them more powerful while you get only enough runes to stay at pretty much the same level, with the default gear, for the rest of your life. In video games, there is always a way to win. Always. Every boss is beatable, again and again and again. When was the last time you beat your boss?