Newest Weird Jeff Goldblum Commercial Not Even an Ad for Anything 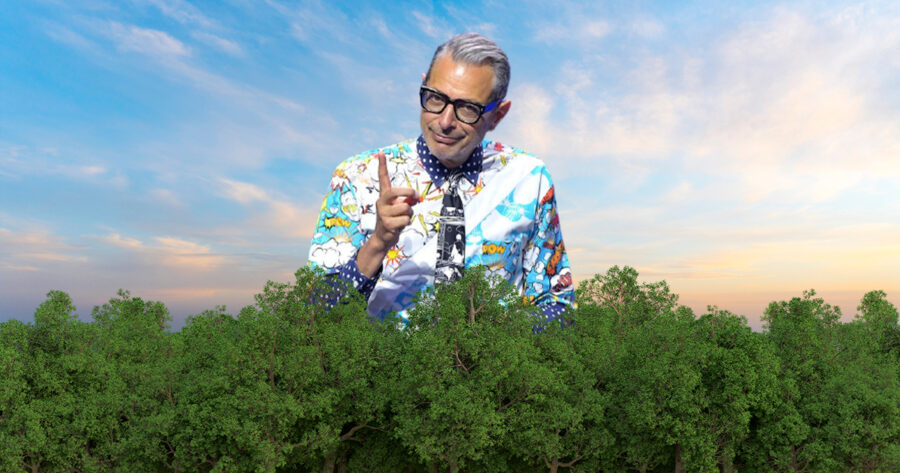 LOS ANGELES — A national thirty second television spot featuring iconic actor Jeff Goldblum does not appear to actually be spreading awareness of any brand or product, confused viewers have confirmed.

“For thousands of years, people have sought answers to the biggest questions in the universe,” began the bewildering commercial that was recently seen around the nation, featuring a giant Jeff Goldblum walking through a forest, his head protruding from the treeline. “And that’s why with a little hard work, and the cooperation of some very important people, we humans are going to be just fine. You can mark my words.”

“Thousands of years,” he repeated, seemingly to himself, before turning away from the camera and trampling off into the sunset on the horizon.

“That was so weird,” said Lisa Benson, who recently caught the widely debated “advertisement” on her local CBS station. “I like all those weird Jeff Goldblum commercials. It’s fun that he’s in on being this eccentric guy in all these movies everyone loves. But like, I figured this was going to be him trying to get me to go to Apartments.com or whatever at the end. But instead he just walked off into the sunset for a really long time, then you hear him yell ‘cut” and it ended. Was I supposed to see this?”

Network executives around the nation were also perplexed by the nature of the recent unanticipated Goldblum campaign.

“We have no inside information as to what the story is with the giant Jeff Goldblum spot,” said Benjamin Rafton, a station manager at KCAL, where the commercial recently ran during an episode of Family Feud. “And frankly, it was bought and paid for by an anonymous source that, if I’m being honest, is quite clearly Mister Goldblum. His money’s good, and if this is how he wants to spend it, we’re not going to stop him.”

As of press time, weird little videos of Jeff Goldblum running around fighting school children have begun playing at the beginning of many YouTube videos, causing further controversy and accusations for the beloved star of Jurassic Park. Frustrated viewers have reported that they cannot skip the videos, not because YouTube won’t let them, but because they just want to know why the videos exist.