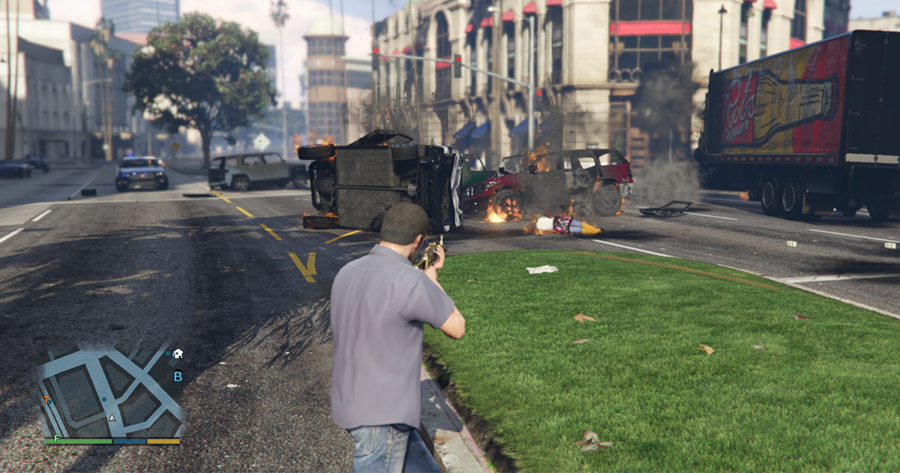 NEW YORK — Grand Theft Auto 5 is getting a new Israel-themed game mode that gives tiny pocket knives to pedestrians, meaning you can murder random people on the street and burn the city to the ground without feeling too bad about it.

“When toggled on, this dynamic new feature will ease your conscience while you do all kinds of messed-up stuff to whoever you feel like. Will you physically see the pocket knife? Probably not, no. But we can promise you that it’s there and you’re free to go to town,” said a Rockstar spokesperson. “Pocket knives are dangerous. They could put an eye out with that thing.”

Rockstar also released a short demo video, which showed an RM-10 Bombushka raining bombs on Los Santos with the new mode toggled on.

“As you can see, we’ve kept the gameplay exactly the same. That means you get the thrill that comes with killing people from the sky, without feeling any pesky moral responsibility,” said the narrator of the demo while the bomber laid down another wave of explosives. “You have our word: There are pocket knives down there. You are basically defending yourself.”

The public beta has already proven wildly popular in America, where players have praised it for adding a feeling of balance to the game.

“So I was playing as Trevor, right? And I took a fighter jet and cleared out a bunch of trailer parks in the desert. Normally, I’d be like, ‘Whoa, Trevor is fucked up for killing all those people.’ Because it’s like, there could be kids in those trailers, you know? But with i-mode turned on, it’s different,” said longtime GTA player Dale Mayberry. “Because of the knives.”

Rockstar also included a teaser for their 4th of July event, which is rumored to celebrate America by adding more cops.