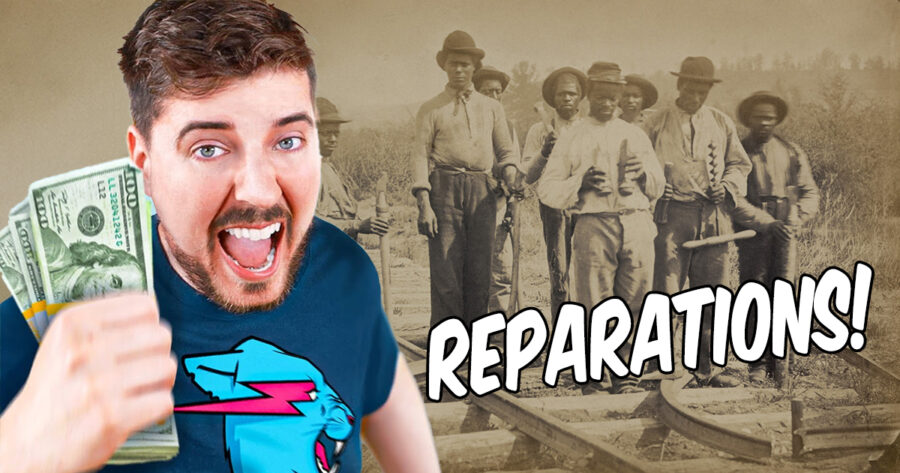 “I got $100 billion dollars, and I gave it all away to my black subscribers who could trace their family lineage back to being slaves in the United States. This is… the Reparations Challenge!” MrBeast said in his new 18-minute video, I Gave Black People $100,000,000,000!

The slickly-edited video, which currently has 60 million views, features millions of black Americans shuffling into large gymnasiums around the country, where they are invited to prove their family lineage dates back to pre-Civil War United States for a chance to win $5,000. Donaldson and his staff then introduce various challenges and obstacles for contestants to get through, giggling as people figure out how to navigate the challenge.

The stunt has received mixed reviews.

“On one hand, it was pretty humiliating to have to be put through the ringer in order to get such a small amount of money. At one point, while filling out a census form, MrBeast gave us all pens with invisible ink and we had to use a blacklight. I don’t think this should be up to a YouTuber making viral content, it should be up to the government to give an actual good amount of money to the descendants of people who were bought and sold as property. The abolition of slavery wasn’t that long ago in our history and people of color feel the systemic effects of it every day, from wealth divides to housing discrimination to employment disparities and so much more,” said one contestant. “On the other hand, I’m gonna spend the fuck out of this $5,000. No one else is writing me checks!”

“holy shit this video is so lit lmaooo,” said a commenter on the YouTube video. “mr beast has convinced me to give up racism!!!! ty king”

At press time, Donaldson was reportedly working on a new video that placed descendants of the Holocaust in whimsical concentration camps for 100 days for a chance to win $10,000.