“IMAX. It All Must Be IMAX,” Mutters Unhinged Christopher Nolan Grafting Camera Into Chest 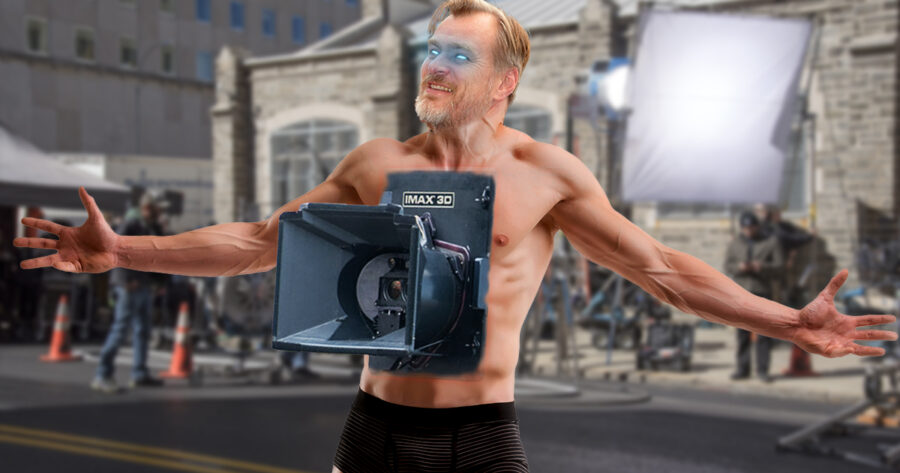 LOS ANGELES — Cinema auteur Christopher Nolan reportedly had a mental breakdown on the set of his new film Oppenheimer in which he grafted an IMAX camera into his chest.

“This world, it’s too grainy and thin,” Nolan pontificated to shocked onlookers, haphazardly sewing a lens between his pectorals. “I must shoot it all, in a clean, beautiful high-resolution format. Yes, society may have to pay an extra three dollars for their ticket, but my masterpiece will be worth the expense. Studio notes, budget concerns, these things mean nothing to me now. I am become Nolan, maker of films.”

Oppenheimer star Cillian Murphy provided insight into what may have set Nolan off in the first place.

“Warner Brothers were getting concerned about the budget, and said we couldn’t afford to shoot the whole movie on IMAX,” Murphy explained. “I saw Chris take one of the cameras they confiscated into his trailer with some sewing kits from the wardrobe department with a maniacal look in his eye. When I went to check on him, the poor bastard was hunched over wincing in pain, I tried to intervene but I was just too late. I hope his wife’s OK too. You know how he gets with wives.”

Nolan later held a press conference to bolster his new appendage and what it means for the future of film.

“Try and take IMAX away from me now,” Nolan cackled. “You’ll have to bring a lot more than some studio executives, because I’m taking this baby worldwide. I won’t rest until every filmmaker has the ability to film amazing action sequences with staggering immersion all at the cost of most of their lifespan and internal organs.”

At press time, sources close to Nolan admitted that while this episode was frightening to behold, the footage captured from it was nothing short of breathtaking.