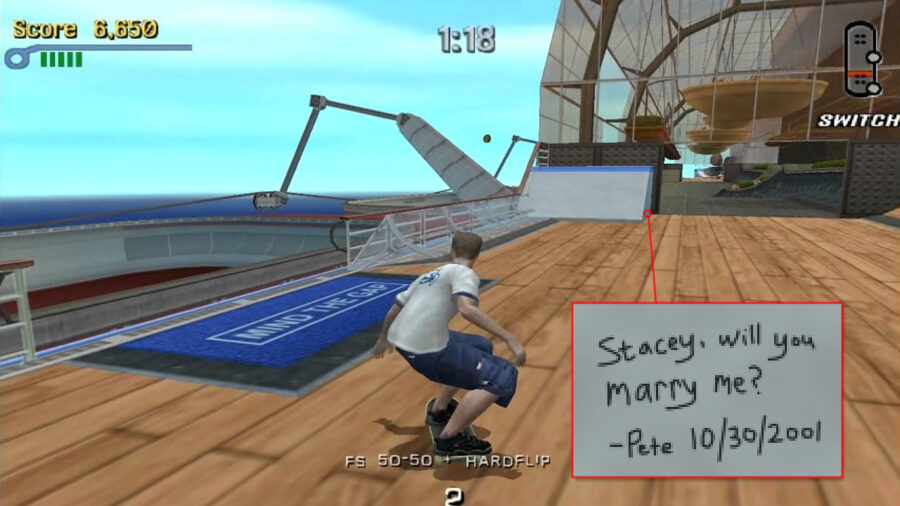 NILES, Mich. —  Almost 20 years after convincing Neversoft to include a hidden easter egg in it’s flagship franchise, local gamer Pete Huss is starting to lose hope that his long term girlfriend will ever find the hidden marriage proposal hidden for her inside of Tony Hawk’s Pro Skater 3.

“It’s definitely getting harder and harder to convince Stacey to play Tony Hawk 3,” said Huss, 39, of his partner since 1999. “She wasn’t really that into it in the first place, but I thought she’d come around. If I could do this all over again, I might have picked a different game or something. Or I guess I could have just asked her straight up and not wasted the best years of our lives arguing about this game.”

Huss further alleged that if nothing else, he should have at least asked for the hidden message to appear earlier in the game, in an easier to find location.

“He wrote us this letter, and I thought it sounded like it’d be a sweet story,” said lead developer Will Nash. “So we went with his idea and put the message in the bottom of the pool in the cruise ship level. You have to grind this one certain pipe to drain the pool. It’s a really tough thing to find on your own. I’m not surprised that she never found it, honestly.”

The cult favorite title was released a few years into Huss’ relationship with Stacey Anders, reported to be during a chapter of their courtship that is virtually unrecognizable to her now.

“We used to play all kinds of games when we first got together. It was so much fun!” she said. “Now everytime I suggest we play something new to spice it up, Overcooked or Mario Kart or something, he just throws a big fit if we don’t play Tony Hawk. I know it doesn’t sound like the worst thing, but it’s been 18 years of this. I wanted to have children!”

The final nail in the coffin of Huss’ plan apparently came yesterday, when his Nintendo Gamecube, originally purchased in early 2001, abruptly stopped working.

“Well, I guess that was all for nothing,” said a dejected Huss. “I should probably contact Millencolin and tell them the gig isn’t happening.”