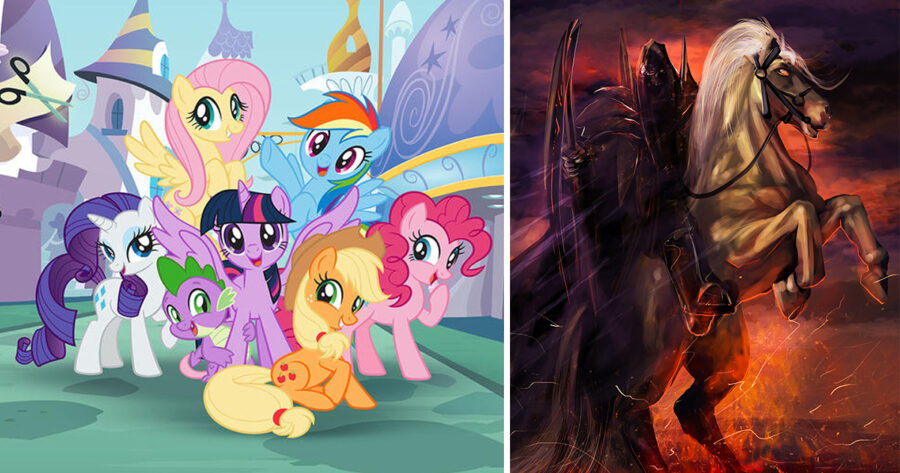 Facebook0Twitter0Reddit0
X
BY Will Carnevale ON June 29, 2022

PAWTUCKET, R.I. — Hasbro has announced a new, darker direction for the My Little Pony franchise, revealing a new character inspired by the pale horse upon which Death rides.

“We’re so happy to introduce you all to Ashen Rose, the latest addition to the My Little Pony universe,” said Hasbro PR representative Damon Evans in a YouTube stream announcing My Little Pony: Ponypocalypse. “Ash, as we like to call her, is a plucky gal who loves friendship, adventure, and spreading murder, famine, and plague across Equestria.”

Hasbro later confirmed that Ashen Rose, a light gray earth pony with a ghostly mane, is based on the pale horse Death itself is prophesied to one day ride into battle. The company hopes to break into a new demographic with the change.

The announcement faced immediate criticism from members of the scripture fandom, who complained that Hasbro hadn’t studied the source material well enough to do it justice.

“I’ve cataloged all the errors in the My Little Pony YouTube presentation. Number one: Revelation clearly says Death rides a pale ‘horse,’ not a pale pony. Number two: Death does not spread ‘famine and plague’ — those are their own horsemen,” wrote r/restoretheKJVerse moderator edgel0rdnsavi0r, going on to list 32 more inaccuracies. “This phony-pocalypse is already proving why biblical adaptations should be left to true artists like Zack Snyder, who would never stoop to plastering misguided Christian symbolism onto branded characters like this.”

Rapper and podcaster Walter “Killah Priest” Reed, also known as Death of the hip-hop supergroup The HRSMN, confirmed that he and fellow Horsemen-turned-ponymen Kurupt, Ras Kass, and Canibus have been heavily involved in the writing of the Ponypocalypse theme song.

“My Little Pony, come ride with the homies… It’s the Ponypocalypse, and you’re watchin’ it. The pharaohs foresaw we next to godliness,” Reed rapped via remote interview with a pixelated Grim Reaper image in the background. “Or, not that. You know, we working it out.”

Leaked promotional images suggest that Hasbro plans to debut the next Ponypocalypse character — a blood-soaked alicorn with a scimitar-horned helmet and wings made of automatic rifles — during an upcoming G.I. Joe Fanstream.