Which of these will make it to your team? Like all new Pokémon generations, Pokémon Scarlet and Pokémon Violet will introduce brand new Pokémon to collect and battle with. In this guide we’ll collect everything we know about those Pokémon so far, from starters to legendaries.

It can be useful to get a head start learning about these Pokémon before the game releases, so that you can plan which ones you want to take on your adventure with you. We’ll let you know their types, abilities, stats, and some of the fun facts that Nintendo has shared. The latter might not be important for becoming the very best, but still, it’s fun to know!

Be sure to check back often as new Pokémon are revealed in the runup to the Pokémon Scarlet and Violet release in November. One of the three starters, Sprigatito is known as the Grass Cat Pokémon.

Ability: Overgrow (when the Pokémon has less than a third of its health remaining, Grass type moves gain a 50% boost).

Sprigatito is reportedly an attention seeking Pokémon that will sulk if its Trainer gives attention to other Pokémon. This isn’t likely to be a real mechanical effect but it’s helpful to know if you want to really get into character! It’s also able to photosynthesize thanks to its plant-like fur.

Sprigatito can also create soothing aromas that lulls its opponents into losing their will to battle. Very useful! One of the three starters, Fuecoco is known as the Fire Croc Pokémon.

Ability: Blaze (when the Pokémon has less than a third of its health remaining, Fire type moves gain a 50% boost).

Fuecoco is a laid back Pokémon that apparently loves food. This might be a good starter to pick if you’re really into the game’s berry system?

The two spikes on top of Fuecoco’s head are actually a leak. It can’t fully contain all of its fire energy, and if it gets too excited, it’ll shoot more flames out. Be careful! On the other hand, the square plates that cover its front and back absorb heat from the atmosphere and convert it into energy that Fuecoco can use in battle. One of the three starters, Quaxly is known as the Duckling Pokémon.

Ability: Torrent (when the Pokémon has less than a third of its health remaining, Water type moves gain a 50% boost).

Quaxly reportedly has a serious attitude and likes to keep things tidy. However, it also has a rowdy side – its strong legs can be used for more than swimming and it will kick opponents in battle.

Like ducks, Quaxly has a glossy coat which repels water. Useful for swimming – but that’s also the secret to how it keeps its quiff so fabulous. 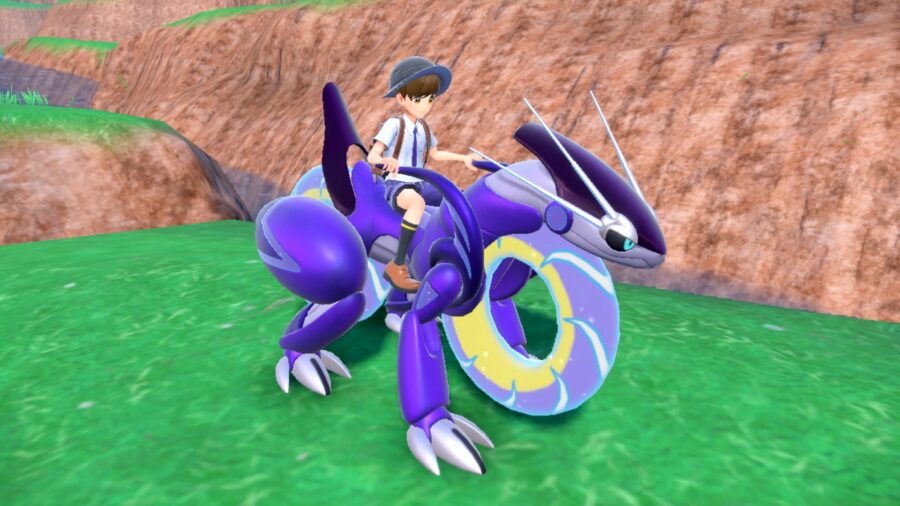 The Legendary Pokémon that will be available in Pokémon Scarlet and Pokémon Violet respectively.

Not much is yet known about these two Pokémon, including their types and abilities. However, they will be used for getting around the Paldea region, as they can transform into land, water, and air vehicles. That suggests we’ll be getting to know them earlier than most Legendary Pokémon. 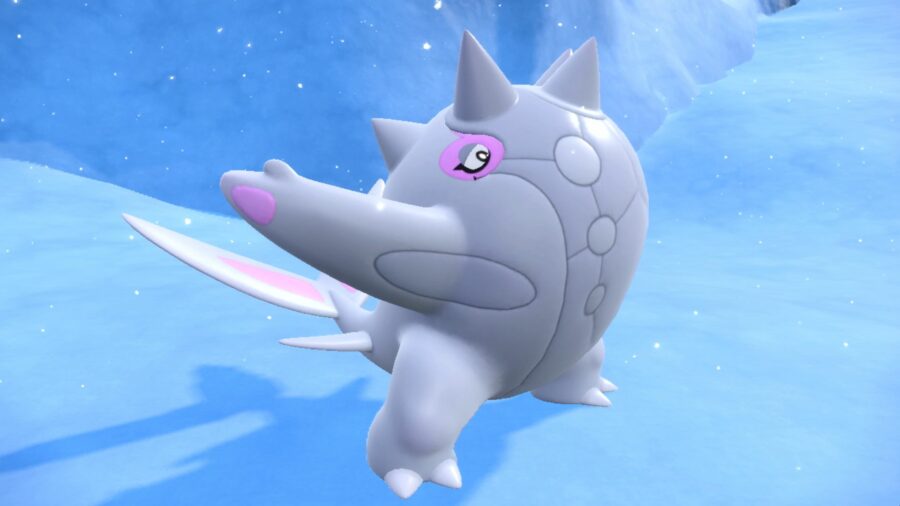 Cetitan is known as the Terra Whale Pokémon.

Ability: Thick Fat (if the Pokémon is attacked by an Ice or Fire type move, it takes half as much damage) or Slush Rush (the Pokémon’s speed is doubled during a hailstorm).

Cetitan weighs an amazing 700 kilograms thanks to its big muscles and blubber layer. It uses these in battle to launch huge physical attacks against opponents. Outside of battle, they’re useful for keeping it warm and fed as it moves around the icy parts of Paldea.

Cetitan also has five horns, which can be used to freeze the area around it, as well as any Pokémon opponents in the vicinity.

It appears that the Ice type Gym leader Grusha uses a Cetitan. 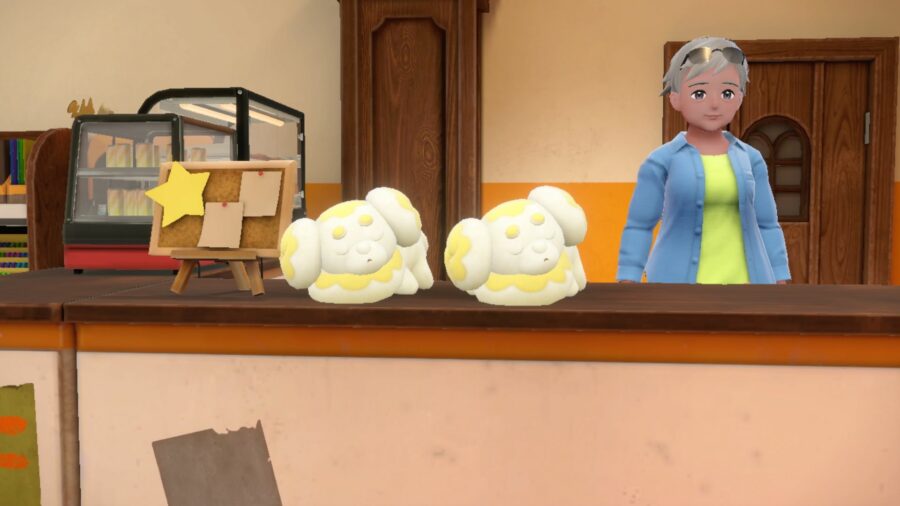 Fidough is simply known as the Puppy Pokémon.

Ability: Own Tempo (the Pokémon cannot be affected by confusion).

Fidough is a very cute Pokémon which is used by people outside of its ability to battle. Its breath contains yeast, which can be used in cooking. Its smooth skin can puff up to intimidate its enemies in battle. Although with that cute face, I’m not sure how well it will work. 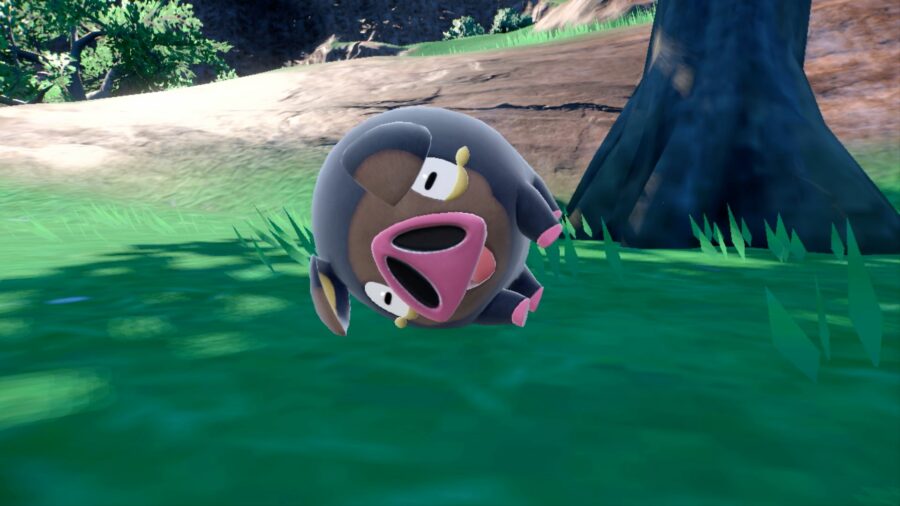 Lechonk is the Hog Pokémon.

Ability: Aroma Veil (this Pokémon and any allies cannot be affected by Taunt, Torment, Encore, Disable, Cursed Body, Heal Block, or be infatuated) or Gluttony (this Pokémon will eat its healing Berry at 50% HP rather than 25%).

Lechonk is another cute Pokémon introduced in Pokémon Scarlet and Violet. It is reportedly a bit of a coward, but its body is strong and muscular. Its giant nose is used to find berries, which make up its diet and give it a strong herbal smell. Pawmi is the Mouse Pokémon.

Ability: Static (moves that make contact have a 30% chance to paralyze the attacking Pokémon) or (any status conditions are healed when this Pokémon is switched out).

Every new Pokémon generation needs a Pikachu spinoff, and Pokémon Scarlet and Violet are no exception. This electric mouse is Pawmi, and its electricity is stored in its cheeks and fur ready to be discharged from its fluffy paws. 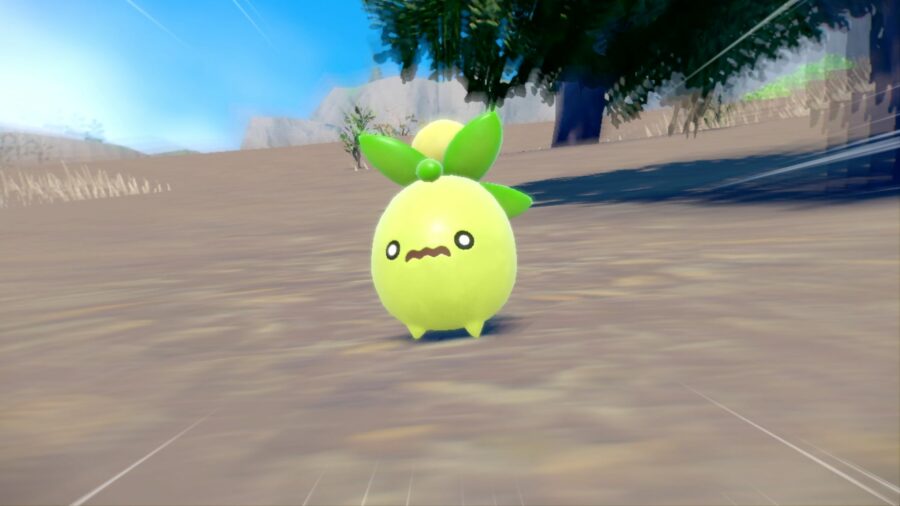 Smoliv is known as the Olive Pokémon.

Ability: Early Bird (if this Pokémon is put to sleep, it stays asleep for half as much time as usual).

Smoliv, despite its looks, is not edible. Instead, it is full of a bitter oil which it can use to attack enemies and slow them down. It doesn’t need to eat much itself, either, as it photosynthesizes using the fruit on its head.

The NPC Nemona, who loves to battle, uses this Pokémon. Though not fully a new Pokémon, Wooper has a new form in Pokémon Scarlet and Violet. It is known as the Poison Fish Pokémon.

Ability: Poison Point (moves that make contact have a 30% chance to poison the attacking Pokémon) or Water Absorb (when this Pokémon is hit by a Water type attack, its HP is restored by 25%).

Paldean Wooper live on the land, rather than the water. To protect themselves, they cover themselves in a poisonous film. This poison is shed through its gills and can be used to attack opponents. Cyclizar is known as the Mount Pokémon.

Ability: Shed Skin (the Pokémon has a 1/3rd chance of curing a status effect every turn).

Cyclizar is used by humans as a sort of bike to explore the region of Paldea. Apparently, it likes to be ridden because it keeps the Pokémon warm in cold climates. It can run at over 70mph and its strong legs are also useful in battle. 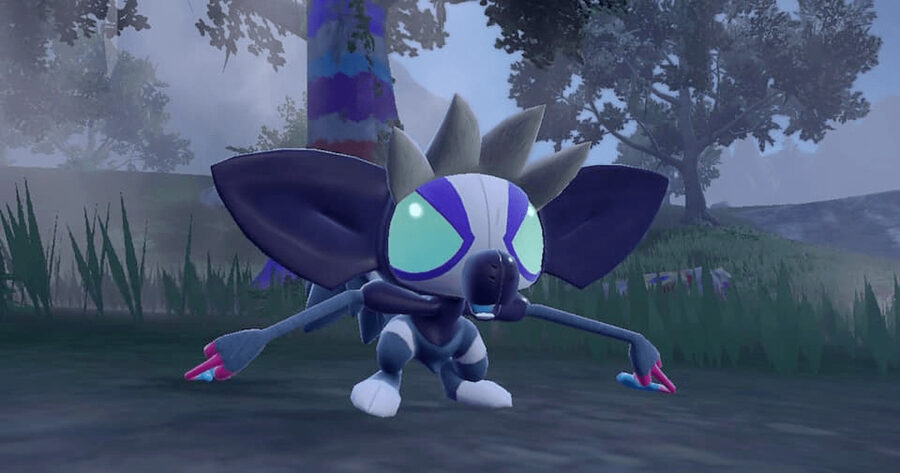 Grafaiai is known as the Toxic Monkey Pokémon.

Ability: Unburden (the Pokémon’s speed stat is doubled when it loses a held item) or Poison Touch (when this Pokémon makes contact with an attack there is a 30% chance the opponent will be poisoned).

Grafaiai uses berries to paint on the trees around its habitat. This draws in bug type Pokémon and paralyzes them ready for Grafaiai to attack. The type of painting depends on what kind of Berries it’s eaten. In dangerous situations – or Pokémon battles! – it can also use its poison to attack. 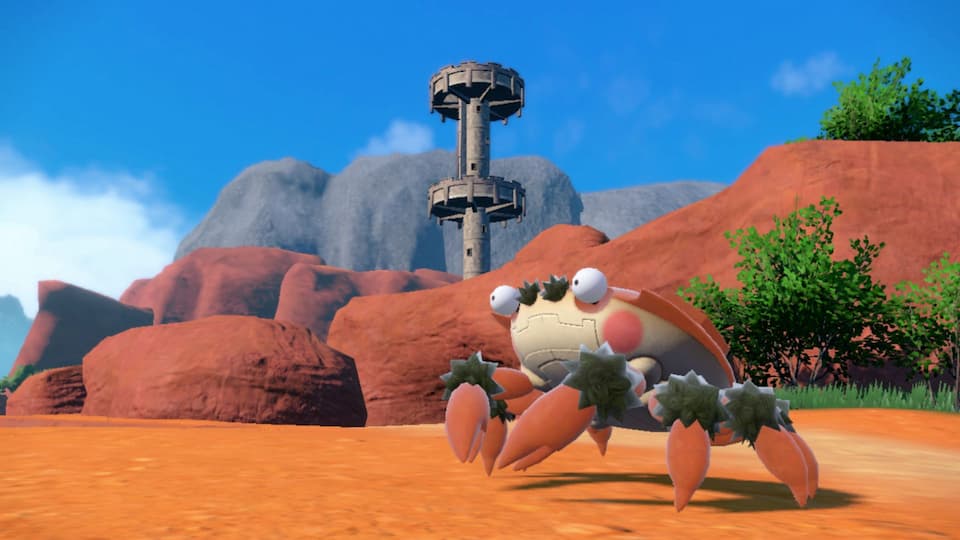 Klawf is known as the Ambush Pokémon.

Ability: Anger Shell (when the Pokémon has less than half HP, it has reduced Defense and Special Defense, but higher Attack, Special Attack, and Speed), or Shell Armor (the Pokémon cannot receive critical hits).

Klawf is a crab-like Pokémon that uses its claws to attack its opponents. These claws grow back if they’re ever lost – which is good news, because they apparently make excellent cooking ingredients.

It can also rotate its eyes around its head, giving it a 360 degree view. By clinging to cliffs, it can ambush passers by. 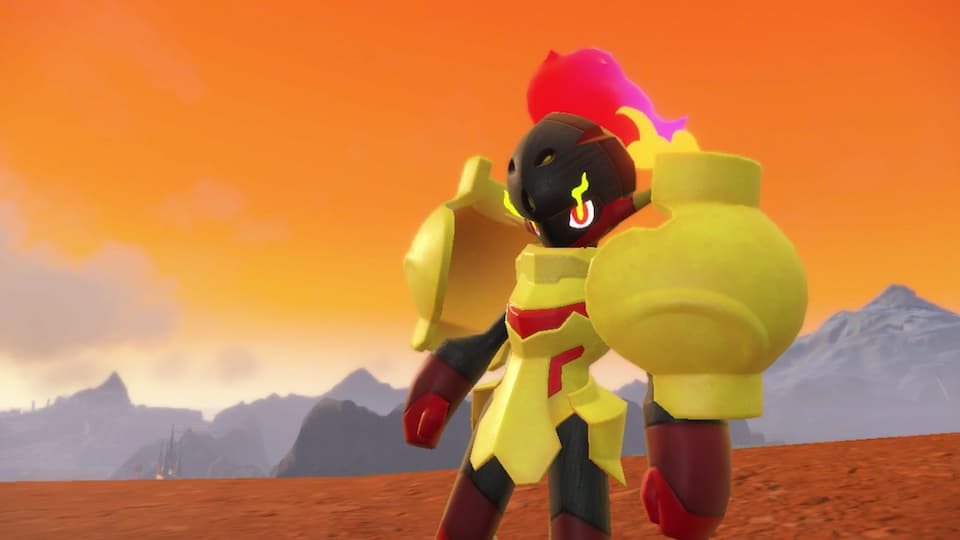 Armarouge is known as the Fire Warrior Pokémon. It will be exclusive to Pokémon Scarlet.

Armarouge wears the armor of a warrior from the past, which lends it its psychic abilities and gives it a strong defense against enemies.

It has a signature move called Armor Cannon which turns its pauldrons into hand cannons. It makes a powerful Fire type attack, but it lowers Armarouge’s Defense and Special Defense. Ceruledge is known as the Fire Blades Pokémon. It will be exclusive to Pokemon Violet.

Ceruledge is armed with powerful ghostly blades which absorb the life energy of its opponents.

It has a signature move called Bitter Blade. This Fire Type attack will slash an opponent and restore Ceruledge’s HP by half of the damage done. Wiglett is a new Pokémon that is strangely similar to Diglett but apparently unrelated.

Just like Diglett, little is known about what Wiglett looks like beneath the ground. However, it can stretch its neck to feed in the ocean. Apparently it also has a fantastic sense of smell, which makes it nervous when approached. It can bury itself in the sand to escape.

We don’t yet know whether Wiglett will have an evolution like Diglett does, but this is not a regional variant like Paledean Wooper. Farigiraf is a new evolution for Girafarig. It is known as the Long Neck Pokémon.

Ability: Armor Tail (a new ability which prevents the opposing Pokémon from using priority moves) or Chew Cud (another new ability which allows Farigiraf to eat a berry again the turn after it does ordinarily).

Farigiraf blends the tail-head mixup of Girafarig into something new after it evolves in Paldea. Its two brains connect, giving it psychic powers and a high reaction speed. It can also defend itself by closing its second mouth around its inner head, and then use this tough skull for strong physical attacks.

Ability: Electromorphosis (when hit, it becomes Charged, boosting its next Electric type attack) or Static (moves that make physical contact have a chance of paralysing the opposing Pokémon).

Bellibolt generates electricity in its stomach by expanding and contracting its squishy body. Those eyes on the side of its head are fake too – the real eyes are the small yellow ones.

Bellibolt is also the partner Pokémon of the streamer gym leader Iono. 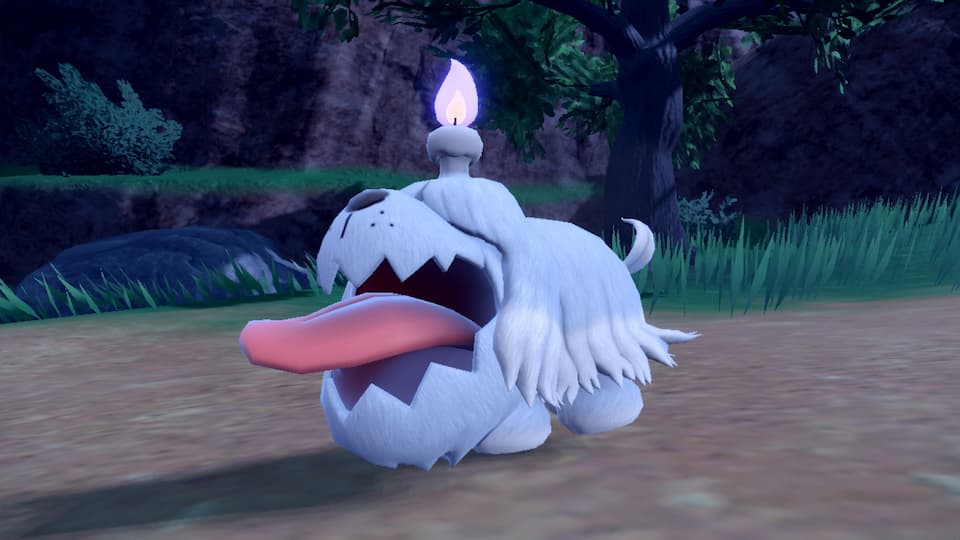 Ability: Pickup (this Pokémon may pick up items from the overworld or from opponent Pokémon during battle).

Greavard is a new Ghost type Pokémon coming to Pokémon Scarlet and Violet. It often hides underground, with only the purple candle on its head showing, so that it can ambush passers by.

It’s described as friendly and lonely, however it accidentally absorbs the life force of those around it. 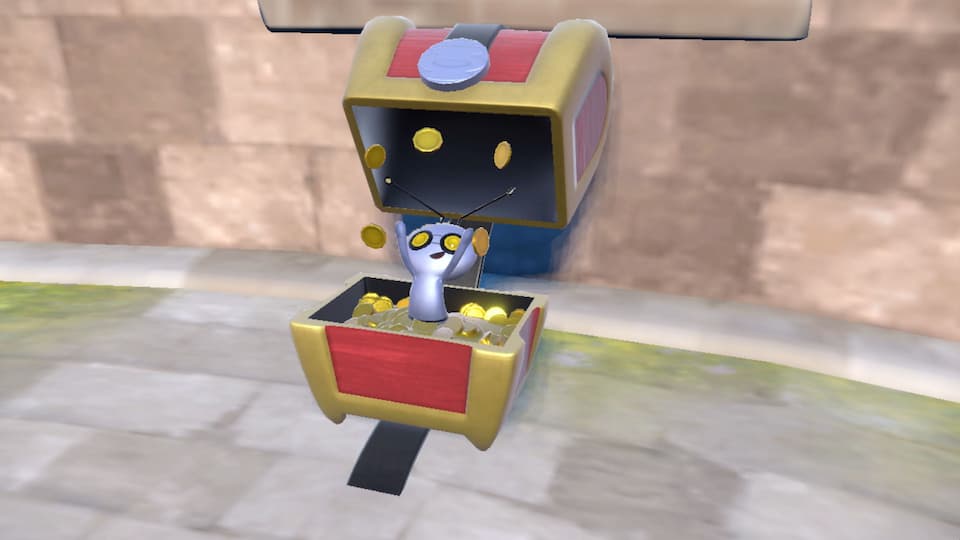 Ability: Rattled (when this pokemon is hit by a Bug, Dark, or Ghost move, its Speed is increased).

Gimmighoul hides inside treasure chests, making it slow to move but giving it a strong defence. It ambushes passers by and uses mind control to make them collect coins for it.

It can also be seen outside of its Chest Form, in the Roaming Form. However, if spotted it will run away immediately, making it difficult to catch.