Deal Alert: SEGA Announces Saturn Mini Loaded With ‘Panzer Dragoon Saga’ and Nothing Else for Just $499 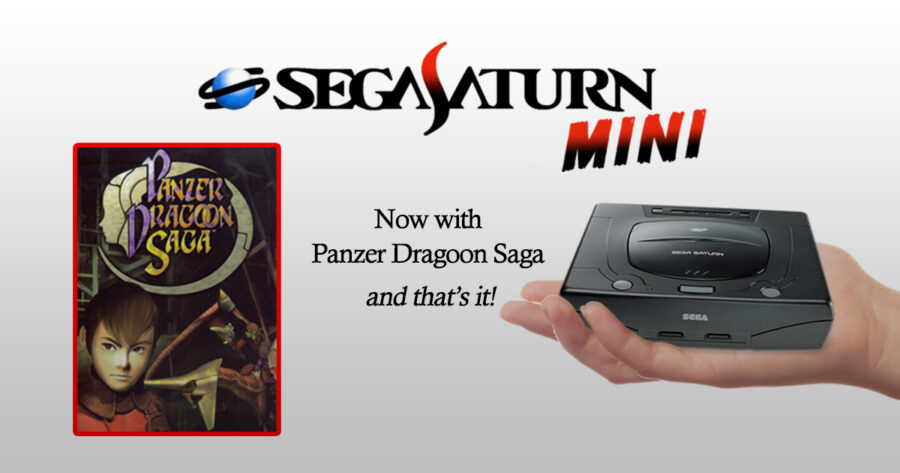 Good news, frugal gamers. Following the success of their 2019 Genesis Mini console, SEGA announced today the Saturn Mini, which will feature pre-installed software and retail for just $499. Considering the rich catalogue of hard-to-find Saturn games, this is certainly the deal of a lifetime!

A representative from Sega  confirmed the full list of included games in the release:

“At SEGA, we’re proud of our rich history in the console business, and we’re delighted to bring back the best the Saturn has to offer at a consumer-friendly price,” said Ian Curren, President and COO of SEGA of America. “With all four discs of Panzer Dragoon Saga pre-installed for just $499, we believe the Saturn Mini will be the new industry leader in value.”

The mini console is based on the original Saturn hardware, first released in Japan in 1994. Its lack of international success led to scarcity and hyper-inflated values of its best game. However, the new Saturn Mini’s impressive one-game lineup could fetch upwards of $1500 on used game markets, so this is not a deal to be missed, as Sega diehards have repeatedly echoed on social media.

“This is a dream come true,” said Sega fan Anita Fischer on Twitter. “As a millennial, I’ve often felt hopelessly priced out of owning nice things like a house or a copy of 1998 sleeper hit RPG Panzer Dragoon Saga. Thanks to SEGA, one of those personal goals is finally within reach.”

Although this is a huge win for consumers, certain small business owners are not as thrilled. The retro re-release represents yet another shift in the ever-volatile used games market.

“I’m cashing out,” said Duane Mullins, owner of a retro game store in Shreveport, Louisiana. “Half of the appreciable cash value of my store is tied up in our lone mint condition copy of Panzer Dragoon Saga. That’s not to mention the foot traffic we get from people stopping by just for the chance to gawk at the astonishingly rare game through the glass. I’ve been warning for years that this Sega Saturn Mini would lead to joblessness, and now it’s happened.”

Concerned store owners like Mullins can at least take heart in the knowledge that SEGA has no further Mini consoles planned at this time. In a followup to their announcement of Saturn Mini, the company reiterated that there is still absolutely no chance they will ever release a Dreamcast Mini.