Can You Violate the Geneva Conventions in Slime Rancher, Destiny, and Resident Evil 4? 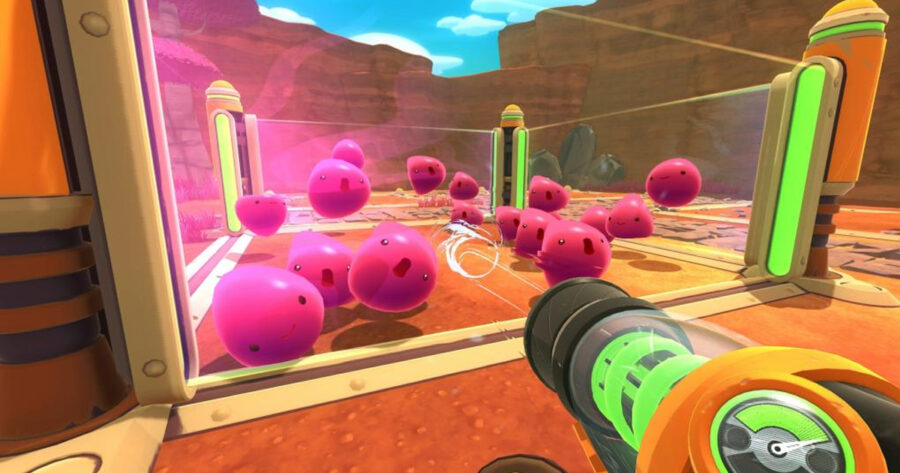 Tiger Force is the moniker of an infamous United States battalion who were known for committing countless crimes during the Vietnam War. It’s no surprise that “Tiger Force” also sounds like it could be the name of the next Activision game, or your average Destiny clan. This is no coincidence; linguistics aren’t the only thing that link video games to war time crimes. Don’t believe me? Strap in for another rundown of ways you can violate the Geneva Conventions in your favorite games.

You can violate article 27 of the 3rd Geneva Convention (clothing, underwear and footwear shall be supplied to prisoners of war) in Slime Rancher. pic.twitter.com/kFGql0NCnG

— Can You Violate The Geneva Conventions? (@ViolateGeneva) July 7, 2020

In Slime Rancher, you head off to another planet and decide to farm its local creatures. The colonization aspects are obvious, but less apparent are the ways this opens you up for war crimes. Putting the local slimes in literal cages makes them prisoners, and thus they must be treated as such. Per article 27 of the 3rd Geneva Convention: “Clothing, underwear and footwear shall be supplied to prisoners of war.” When’s the last time you offered your slimes a pair of pants? Disgusting.

You can violate the Outer Space Treaty (the Moon shall be used exclusively for peaceful purposes) in Destiny. pic.twitter.com/fZiYFd1zxD

— Can You Violate The Geneva Conventions? (@ViolateGeneva) July 8, 2020

The Outer Space Treaty is a bit of a catch-all for any video game that doesn’t take place on Earth. In the case of Destiny and its sequel, your Guardian directly violates the mandate specifying that “the Moon shall be used exclusively for peaceful purposes.” It doesn’t matter who started the conflict; when you throw your void bomb at the Moon’s surface, you’re no better than the Hive. Zavala would be so disappointed in you.

You can violate article 9 of Additional Protocol II to the Geneva Conventions (religious personnel shall be respected and protected) in Resident Evil 4. pic.twitter.com/ikcSfIye31

— Can You Violate The Geneva Conventions? (@ViolateGeneva) July 3, 2020

If you’ve played Resident Evil 4, you’re familiar with Los Illuminados. Leon grapples with this sinister cult throughout the game, but he’s not always the good guy in this conflict. During one specific section, Leon essentially breaks into their castle and begins killing the religious leaders one by one. Since article 9 of Additional Protocol II lays out the need for religious personnel to be “respected and protected,” Leon is essentially carrying out a church massacre here. Maybe Las Plagas aren’t so bad after all.

Every video game that uses a Red Cross to denote health is doing so in violation of the Geneva Conventions. pic.twitter.com/O3U12pWAtl

— Can You Violate The Geneva Conventions? (@ViolateGeneva) July 6, 2020

This one is a very serious matter. The Red Cross is not a toy; it is an important medical symbol exclusively reserved for life-saving medicine and personnel. Games that misuse the emblem are violating a very real crime. Just ask Stardew Valley, which had to replace red crosses with green ones in 2018. Game developers: if you want to avoid jail time, I urge you to stick to hearts.

This one’s a bit of a bonus for anyone who’s sick of acting out digital war crimes and wants to start committing them in real life. If you join the U.S. Army’s esports team, you can kill two (or 2,000) birds with one bomb. You better start firming up your K/D ratio if you want to enlist though, because there’s no respawning IRL.