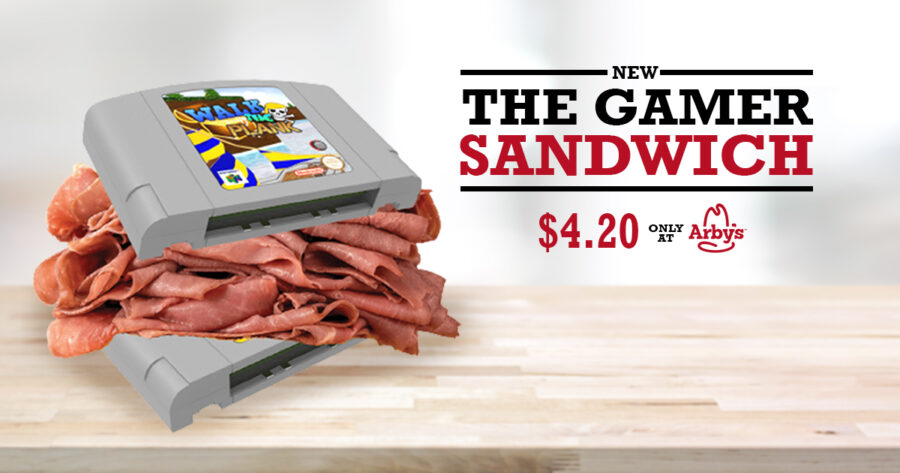 ATLANTA — Popular fast food chain Arby’s has debuted a new “Gamer Sandwich” menu item consisting of a quarter pound of their signature roast beef sandwiched between two video game cartridges from the Nintendo 64 console. The sandwich is meant to be marketed towards video game players nostalgic for the days of retro Nintendo and warm, juicy Arby’s roast beef.

“We have found gamers will buy almost anything retro Nintendo,” said Arby’s Chief of Marketing, Dan Whitney.  “I think people have been waiting for this combination for a long time, and we finally gave the people what they wanted.”

“It’s truly a match made in heaven,” Montgomery said. “The gooey, hot roast beef and the cold, crunchy plastic compliment each other. I actually got a rare Japanese Smash Bros. cartridge once, but instead of playing it, I slathered it in barbecue sauce.”

Arby’s Regional Manager Rachel Bergman spoke about the potential future expansion of the Arby’s menu to include even more gamer themed sandwiches.

“If things go well with this promotion, we plan on building upon the gamer sandwich down the line,” Bergman said. “For instance, we are currently focus-grouping a vegetarian alternative that also replaces the roast beef with a third N64 cartridge.”

In competition with Arby’s, this week McDonald’s unveiled their new seasonal ‘Gamer McRib,’ which upgrades the classic sandwich with a rumble pak.