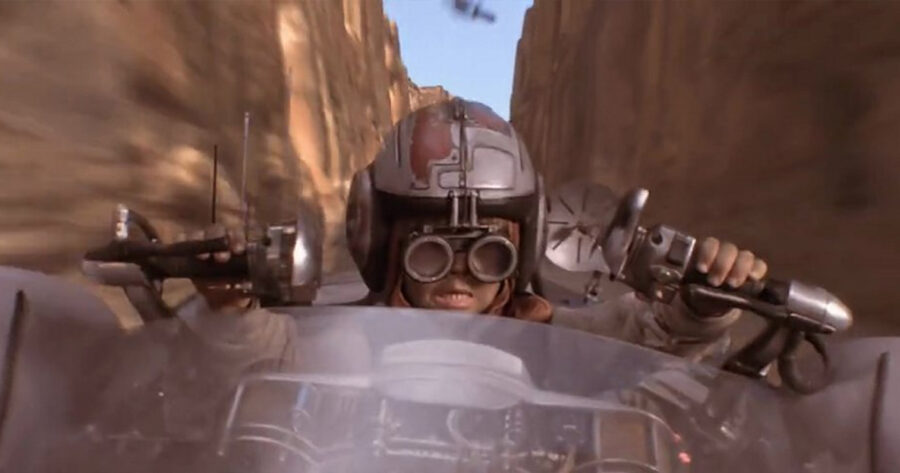 TATOOINE — Following his recent first place victory, Anakin Skywalker’s podracing records were called into question when it appeared that he may have been harnessing the power of magical living cells known as midichlorians to gain an unfair advantage in the race.

“Upon further evaluation, our judges have found that the winner of the Boonta Eve Classic, Anakin Skywalker, had performance-enhancing intelligent lifeforms in his bloodstream,” said Jabba the Hutt, in more or less those words. “Thus, we cannot in good conscience recognize his podracing career at this time. Such is to be expected from Jedi scum.”

The inciting incident to call Skywalker’s potentially illegitimate abilities into question was first noticed by a rival racer.

“I straight-up mangled that kid’s podracer before the race, shoved all kinds of illegal shit into it to blow the gaskets and send him flying head first into a sheer rock wall,” said Sebulba, a crowd favorite contestant of the event. “Halfway through the race, he sticks his arm out, and uses his mind or some shit to pull back some loose wiring and reconnect it to his ship. It’s like, what? How is that even fair?”

The decision did not come without controversy, as some called the verdict out as blatant discrimination against Jedi.

“Without the midichlorians, life could not exist. There would be no galaxy, no podracing, no Jar Jar, nothing,” remarked Jedi Master Qui-Gon Jinn. “We do not choose midichlorians, they choose us. Asking a Jedi not to use the Force would be like asking us to deny our basic instincts, and the decision to wipe Anakin’s records clean is blatant discrimination on its face.”

At press time, both sides of the debate had come together to agree that, either way, the decision would have no clear ramifications on Skywalker’s outlook or the future of the galaxy at large.