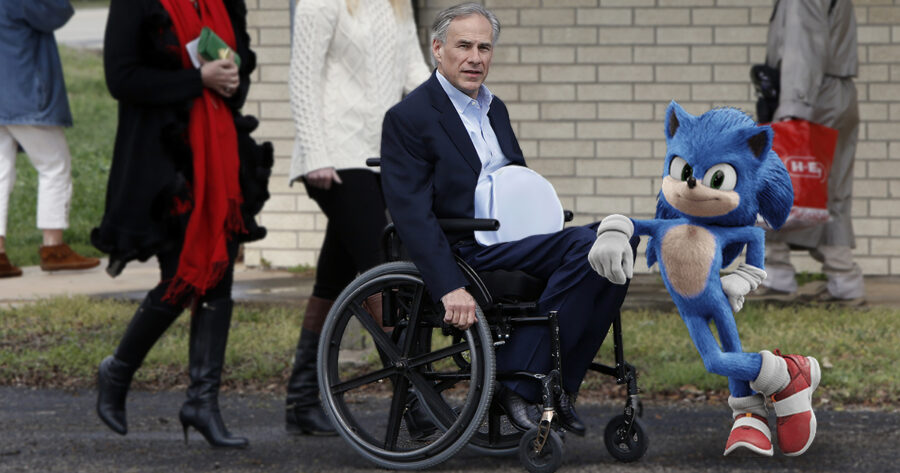 AUSTIN, Texas — The Texas legislature backtracked on the controversial law that prohibits abortions as early as six weeks after Governor Greg Abbott announced he had been impregnated by Sonic the Hedgehog.

“As Republicans, we believe that all life is sacred, but even we have our limits,” said Texas House Speaker Dade Phelan. “Some may call us hypocrites now that the leader of our party is mpreg, but we are willing to admit we took things too far. We look forward to working with our colleagues across the aisle to pass a bill that will let Greg flush this monstrosity out of his body.”

After weeks in which his baby bump grew more visible, Governor Abbott finally addressed the rumors head-on, in a press conference during which he came clean about his affair with the star of the popular Sega franchise.

“We met at the Chili Parlor over on Lavaca,” said the Texas governor. “We locked eyes from across the bar, and it was just electric. Next thing I know we’re back at the governor’s mansion and he’s running me upstairs. For such a speed demon, I was surprised to find him to be a kind, generous lover. Just thinking about that night could almost make my toes curl.”

While the governor admitted to enjoying the night he spent with Sonic, Abbott ultimately characterized it as an error in judgement, one which he hoped would not define the rest of his life.

“I was stupid,” Governor Abbott added. “And now because of one mistake I’m stuck with this thing growing inside of me. I’m not ready to be a father to a hedgehog. How am I supposed to keep up with the little guy?”

For Texas pro-choice advocates, the rare victory came with a dose of confusion.

“Sorry, I’m still trying to process all of this,” said activist Melissa Zeller. “I mean, of course we’re overjoyed by the news, I just, man. I just wish this could have come about in a less weird way.”

At press time, the Texas legislature announced that it will also introduce a bill in its next legislative session to empower citizens to sue anyone with a Deviant Art account.