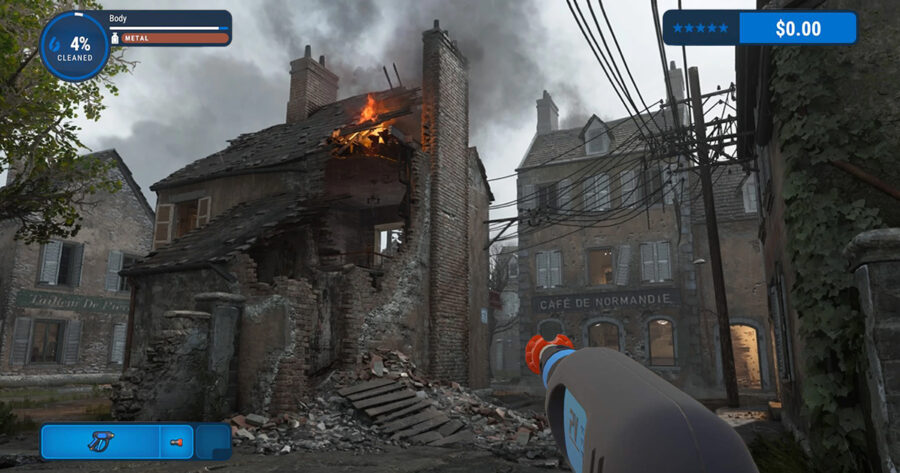 “We are taking this series in the logical next step for the franchise, and that’s taking it back to World War II,” said Nick McCarthy, a lead developer with FuturLab, the creators of PowerWash Simulator. “We are so glad that people responded positively to our game. We racked our brains and couldn’t come up with any more fun contemporary stuff for players to hose mud off of, so we’re off to Warsaw, Normandy, and Berlin to clean some of the more famous military vehicles of the era!”

“Also, the game takes place while the war is happening,” he clarified.

Fans of the original were overjoyed to hear its sequel would be taking place during one of the more popular wars.

“Whoa, that sounds badass,” said Brandon Bertram, a fan of PowerWash Simulator. “Did you see that teaser they put out where you’re power washing the tanks as they advance through the countryside? I don’t know if it’s all the way historically accurate, but I’m truthfully just stoked to play through World War II in a new way. Those tanks are gonna fuckin’ shine, baby!”

Some, however, felt the liberties taken for the sake of the game were disrespectful to the participants of the war.

“This is just shameless, we really need to stop mining atrocities for entertainment value,” said Rick Edwards, a history professor at UCLA. “I mean look, I’m not going to lie and say it doesn’t look as fun as all get out to power wash the dirt off of a Boeing P-26 after it engaged with Japanese fighters over the Batangas Fields. They really knew how to make aircrafts back then, I tell you. They look absolutely gorgeous in this game, too. Still though, absolutely shameless. I better try it though, to see just how shameless it is, don’t you guys think?”

As of press time, FuturLab wouldn’t confirm whether PowerWash Simulator: WWII would feature a zombie mode as rumors have heavily suggested.