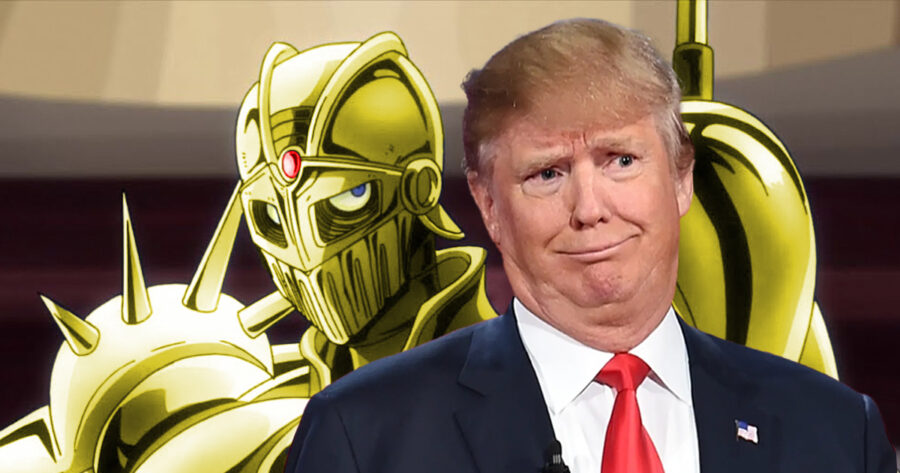 “Based on the speed and power of that most recent clip of Trump playing golf, I have to assume he’s got the power of a Stand who’s currently invisible to us,” said Vaughn Roberts of the YouTube channel WhereWeGoVaughnWeGoAll. “The way he keeps deflecting subpoenas and legal challenges at lightning speed, it’s the only explanation at this point.”

Speculation along these lines has run rampant, with clue-hungry QAnon followers eager to jump on any detail to confirm evidence of Stand powers at use.

“I made a post that got to the front page because we thought it was the first spirit photo of Trump’s stand in action, but it turned out to be Barron Trump,” said another commenter, JoJoBidensBizarrePresidency. “How was I supposed to know the difference? That kid grows five more inches every time he steps in front of a camera. Either way, thanks for the gold I guess!”

“It’s currently unknown how the former president could have acquired the theorized stand,” said Roberts in a follow-up video rounding up the top ten most popular clues related to the theory. “But we believe that it must have short-range abilities, with the ability to detect satanic pedophiles and possibly obliterate their genitals. Surely Trump will show the Stand’s true power soon and all will be revealed then. He sure does love to leave us on cliffhangers, just like JoJo’s!”

At press time, proponents of the theory were speculating on whether Trump’s stand might be named Dead Kennedys, Back In The U.S.A., or Ol’ Dirty Bastard.