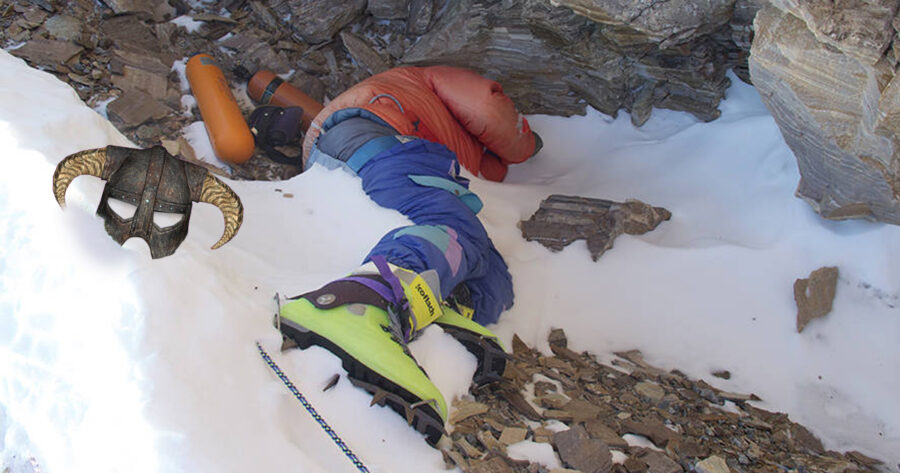 NEPAL — The Elder Scrolls fan site FansRoDah.net shocked the climbing world today when it reported there are hundreds of dead Skyrim horses and adventurers along the southeast ridge of Mount Everest.

“The only logical explanation is the frozen horses had been used to climb the mountain centuries before Sir Edmund Hillary summited it,” the report reads. “Based on the horrifically twisted horse limbs, it appears riders somehow figured out a way up the backside of the Khumbu Icefall that defies all scientific understanding and reached the top at an astonishing speed. Unfortunately getting down proved problematic, as you can see by all the dead horses around me.”

“Obviously, we need to reevaluate everything we thought we knew about the mountain’s history.”

Read More From Hard Drive: Bethesda Employee Dead After Attempting to Port Skyrim Onto Own Body


However, prominent mountaineers have decried the report and its findings.

“Hillary and Norgay are rolling in their graves,” said Bradley Hall, esteemed British climber who summited for his third time last May. “Climbing Everest the right way takes either years of training and determination, not just taking advantage of faulty physics mechanics to ride a horse all the way up.”

“To even suggest that riding a horse towards a mountain, slowly circling around it until you find a divot in the surface that allows you to gallop upward at an impossible angle, is the same accomplishment is to spit on the graves of all the brave adventurers who have died,” Hall went on to say, “Which you can’t even do it because it is so fucking cold up here your loogie freezes in mid-air because this is Ice Hell.”

The government of Nepal, whose country derives much of its GDP from assisting climbers going up the legendary mountain, have twisted the story into a positive.

“These perfectly preserved horses, medieval soldiers, and cat-people littered across the mountain are perfect mile markers to help climbers ascend,” said President of Nepal Bidhya Devi Bhandari. “We are hoping they bring even more tourists and adventurers to our country to discover the natural beauty of Everest, along with all of its glitches.”

At press time, FansRoDah.net was preparing a supplementary report detailing an odd string of robberies in Kathmandu. Apparently, the perpetrator’s M.O. is to place a vase over the cashier’s head and steal all the candlesticks and cheese wheels.