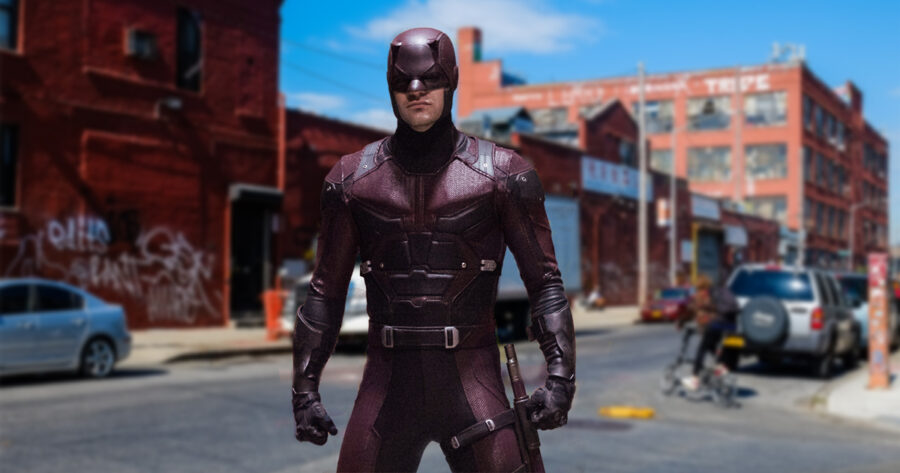 BROOKLYN, N.Y. — Rising rents in the Manhattan neighborhood of Hell’s Kitchen have forced the vigilante known as Daredevil to relocate to the much more affordable neighborhood of East Williamsburg.

“It’s a long time coming,” stated landlord and local business owner Robert Stillman. “Even the Kitchen Irish have had to leave. It ain’t the same neighborhood it used to be. A lot of young tech startup employees have been moving in, and they’re really civil. You can actually walk around at night now without getting wrapped up in the middle of some crazy martial arts fight.”

Instead of enduring a new 40-minute commute to get into Manhattan, the Man Without Fear has vowed to shift his crime-fighting focus toward the streets of his new L-train adjacent neighborhood. His first goal will be to free the area’s record stores from the grip of the Vinylator, a seedy merchant who has been gradually inflating the prices of vinyl records for years.

“It may seem like just hipsters in studio art spaces from a distance, but there are serious crimes going on here,” explained Daredevil. “The Beacon’s Closet on Varet and Bogart was charging $50 for a vintage Garfield tee. That’s flat out robbery.”

In addition to new foes, the Crimson Crime-fighter will also have new roommates, moving into a shared co-op with 8 Brooklynites. “I’ve fought off dozens of The Hand’s ninjas at once, so this should be easy,” said an optimistic Daredevil.

“We’re all artists, each in a different medium, so we don’t have a problem living with an eccentric night owl,” said house-yogi River Levar. “I also used to patrol the streets at night in search of scraps of wood to build our furniture, so we have something in common. As long as he participates in composting and respects the house chores, I think we’ll get along great.”

“Daredevil seems nice, but he also seems pretty obsessed with reducing the cost of things in the neighborhood,” reported neighbor Shelly Rodriguez. “I guess he’s still kind of sensitive about getting priced out of Manhattan. But I guess I’ve had weirder neighbors, and he’s even not the first one I’ve seen walking around here in red leather and horns.”