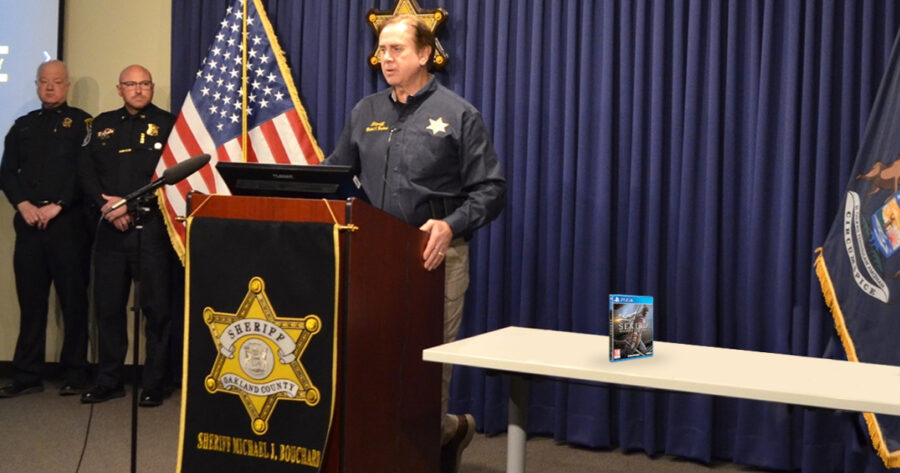 OAKLAND COUNTY, Mich. — Local police have gathered around a copy of a violent video game they removed from the streets earlier today in a celebratory photo, sources have confirmed.

“We like to let our community know that we’re out there making them safer, and that’s exactly what we’ve done here today,” said officer Colton Fowler, standing alongside three other officers around a table containing a copy of Sekiro: Shadows Die Twice for the PlayStation 4. “We take these pictures to show any would-be criminals that we’re NOT to be messed with. We got another game of the streets today, no telling what kind of monster it could have created if we didn’t get involved.”

Many in the community have stated that not only was the game’s seizure excessive, but that the celebratory picture doesn’t paint the picture police think it does.

“Oh wow, a bunch of cops were able to confiscate a PlayStation game from somebody, look out,” said Kate Steiner, a Facebook user that saw the Oakland County Police Department’s post. “I can’t believe that cops want us to believe they’re like The Punisher when they also insist on posting Facebook selfies with every sparkler they confiscate off of the streets. Would The Punisher spread contraband around a table so that it looked good for a photo? No, you fucking dorks, he’d slap that camera out of your hand and shoot you or at least stab you in the leg or something.”

The incident occurred earlier this afternoon, when police noticed a teenager handing a copy of the game to a fellow teenager in the street. After determining that both parties looked to be under the Mature-rated game’s age requirement of 17, officers intervened.

“I was letting my friend Ricky borrow Sekiro since I’d finally beat it,” said the Quentin Barber, the young man arrested in today’s incident. “And next thing I know, I had been tear gassed, tazed, choked, and pinned down, all the while officers were asking me if I had any other dangers to society on my person. As I was getting my bearings back, they kept on high fiving and taking pictures with the game and I swear to god I saw a few of them kissing each other. I don’t think they’re making anyone safer.”