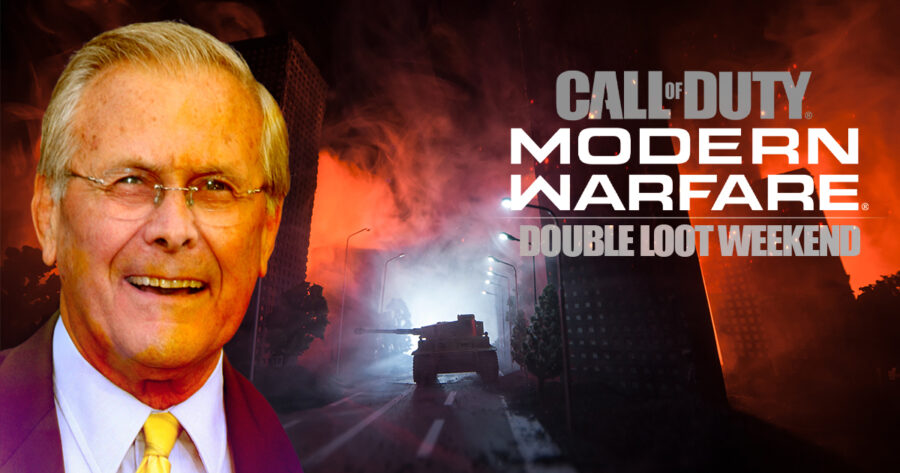 SANTA MONICA, Calif. — Activision has announced Call of Duty will let players loot twice as much this coming weekend, to honor the passing of statesman Donald Rumsfeld.

“Double XP is boring. Instead, we wanted to do something that really honors who Donald Rumsfeld was, as a person and a leader,” said Robert Kotick, CEO of Activision. “So, beginning Friday night, Call of Duty players can celebrate this great man by robbing double the money, weapons and resources from the corpses of people they just murdered overseas.”

Kotick did not hesitate to heap praise on the politician, whose passing was announced today.

“For the Call of Duty family, Rumsfeld wasn’t just some guy. He was a huge part of our success. Those wars we all love so much? He helped get them started, sometimes completely from scratch,” Kotick said. “When gamers are clearing out civilians and stripping homes clean this weekend, I ask them to remember who made it all possible.”

While some observers found the gesture inappropriate, others argued that a video game promotion was the best possible tribute to Rumsfeld’s career.

“When it comes to making war into entertainment, this man was a pioneer, no question,” said media analyst Amelie Nicholson. “Before we even had Call of Duty, Rumsfeld was already teaching Americans how to watch war on a TV screen, totally numb to the suffering being inflicted in their name halfway across the world. Rumsfeld walked so that Warzone could run.”

At the end of the press release, Activision also teased the setting for the next installment in the Call of Duty franchise.