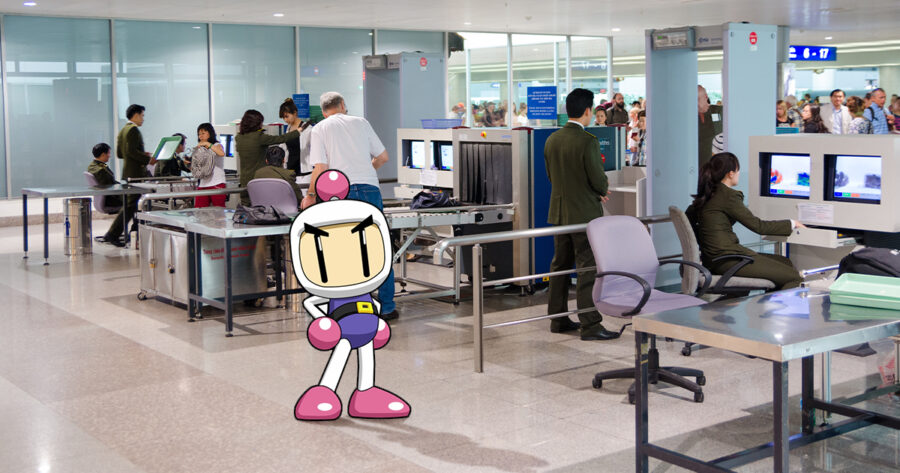 NEW YORK — Local explosives enthusiast Bomberman has accused the TSA of unfair profiling, after being detained for additional screening at LaGuardia Airport this morning. TSA agents denied the allegations, claiming he was chosen at random.

“I am here legally. I was awarded dual citizenship of the United States and my homeland, Planet Bomber,” said Bomberman in a press conference. “Judging me by my appearance, outfit, and online reputation is appalling and unjust, and I am deeply disappointed in the TSA staff that allegedly claims to keep our airways safe.”

The TSA agent in charge of the screening, Alice Corbert, claimed the extra search was done by the book.

“We brought Mr. Man into a separate room and went through his luggage,” Corbert said. “While he did have over 50 large cartoon bombs in his bag and pockets, Mr. Man showed us that they had been declared on his ticket. He had all the right permits in order, so he was released.”

TSA President Arnold Washington spoke out in defense of the additional screening.

“His name is literally ‘Bomberman.’ I mean, come on,” Washington said. “His identification also lists his occupation as ‘Bomberman.’ So it’s just a card with ‘Bomberman’ written on it twice. I’m surprised he was even allowed on the plane at all.”

Bomberman claimed it was unfair to judge his character based on what he does for a living.

“Blowing up buildings and my enemies is just a day job for me,” Bomberman said. “Just like every other blue-collar American, I plant enormous explosives from 9 to 5 everyday just to put food on the table. The TSA hassling an American citizen just because he has been known to send full planets exploding into the cosmos is not only unfair, it’s un-American.”

In the outcry following the incident, anonymous sources inside the TSA indicated that the additional screening had nothing to do with Bomberman’s excessive explosives, but rather a Dasani water bottle he attempted to bring on the plane.