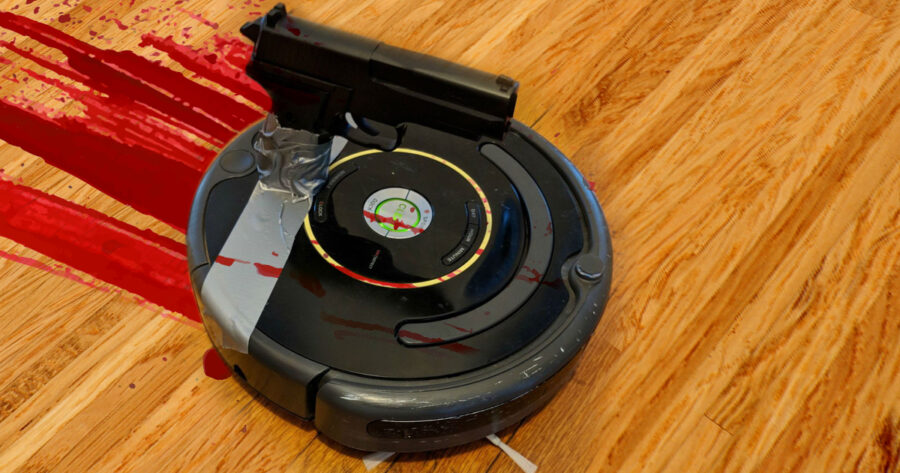 CAMBRIDGE, Mass. — Several graduate students associated with the Massachusetts Institute of Technology’s Media Lab have taken shelter in a supply closet after a Roomba hacked to run DOOM got loose during a demonstration.

Over the course of a 24-hour “hackathon”, three MIT graduate students in computer science modified an of-the-shelf Roomba to run the classic PC shoot-’em-up DOOM. A commotion erupted early Tuesday when the Roomba, which was designed to autonomously vacuum hardwood floors and short pile carpets, was consumed with what team leader Thomas Shu describes as “bloodlust”.

“At first, we thought the grunts were cute,” Shu explained, referring to the Roomba’s apparently unplanned decision to hijack the onboard voice synthesizer to emulate the Doomguy. “But then it said, ‘I wanna be knee-deep in dead’ and Daryl lost a damn toe. We still don’t know how it got razor blades in its wheels. It must’ve been planning before the presentation started.”

Read More From Hard Drive, The Only Ethical Gaming Journalism Site on The Internet: Friend Skims HTML Tutorial After Coming Up With Idea for Largest Open World Video Game Ever

Following the amputation, the “DOOMba” navigated to the center of the classroom, where it began spinning in circles daring those in attendance to “hurt [it] plenty.” When event coordinator Nancy Valdespino attempted to access the vacuum’s off switch, she was met by a blast of fire from a flamethrower concealed beneath its AeroVac™ Bin.

Her current medical condition is not known.

In the ensuing stampede to flee the room, a fire alarm was pulled and police called. The fate of the first responders is not known, although it appears at some point the robot was able to acquire a handgun.

The three team members — Shu, Daryl Thomas, and Saanvi Narayanan — along with two other event participants were able to take shelter in a media supply closet as the DOOMba opened fire. It remains at large. As of press time, the bright minds of tomorrow were hard at work lashing keyboards and old DVD players to their torsos as makeshift body armor.