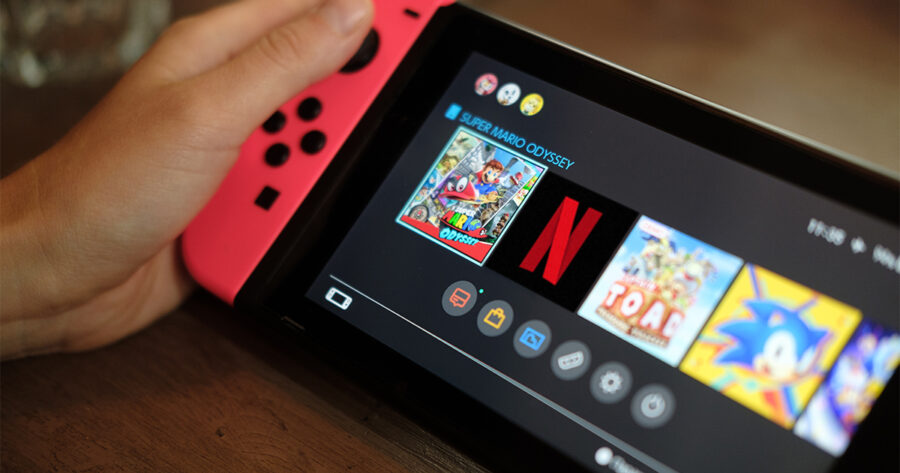 Before I start complaining too much, let me say this: I love my Switch. About three years ago my wife and I got rid of most of our shit and piled into a camper to boondock across America for a while, and it’s honestly difficult to imagine our unplug-from-the-grid phase without my Switch by my side (I was like so-so at the whole “going off the grid thing,” obviously). While we were roughing it without a bathroom or a leakproof ceiling, I recall spending many nights playing Mario + Rabbids Kingdom Battle and yelling into the beautiful countryside “Why is this stupid game so fun?” I endured the drudgery of laundromats all over the midwest with a little help from Hollow Knight. I also played a lot of Battle Chef Brigade on my laptop, which doesn’t really fit into this narrative at all, but holy crap, go play Battle Chef Brigade everybody.

So okay, I love my Switch. I just wish it could do more. Like, things that have been considered basic for years and years at this point. The other day, after having read his SCATHING DAMNATION of the new Pokémon game, “Pokémon Legends: Arceus Is Exactly the Game Fans Begged For in Like 2011,” I saw my homeboy Jeremy “The King” Kaplowitz was online and playing Pokemon. I went to send him a message that said, “Have fun in 2011,” but I couldn’t. I was stuck in 2004. Why can’t I send my friend a little message and bust his balls a little bit? I understand Nintendo’s family friendly approach means that they don’t want players being harassed, so I understand not allowing DM’s to strangers, but to my friends? My very close Nintendo friends? My good Nintendo friend SW-1952-1782-8870? Get with the times, Nintendo.

The inability to tell my friend he was stuck in time got me thinking about the Switch in general. About how it contains the greatest game library I’ve ever owned, but it’s stuck on underwhelming hardware. Sadly, this is but one of several ways that Nintendo has prevented the Switch from being a truly great system. For every Breath of the Wild, there’s a convoluted online subscription service. For every Metroid Dread, a feature you can’t believe a major video game console would be without in 2022.

I think for me the most glaring oversight may be the absolutely abysmal options the Switch offers for video apps. They have Netflix on dryers now, but still not the gaming system I play every day. Seriously, how am I able to play Hades, Super Mario Bros. 3, Knights of the Old Republic, Portal 2 (soon), and Mario Kart 8, yet it still has less exciting video options than my 3DS offered?

And that’s part of what makes this so frustrating, there is a history of Netflix being on Nintendo consoles. Did you know the Wii literally was able to stream Netflix a decade ago? A decade! Think about that.

Okay, that’s probably enough thinking. Thank you. Most people don’t think about shit when an article tells them to. They just keep reading. But you really thought about it when I asked. That’s so cool.

A decade ago, apps and streaming technology were blowing our minds with their convenience and innovation. Ten years later, and if I have to charge a device and I can’t watch 30 Rock reruns on it, what in the fuck are you even doing? The Switch has skated by on its good looks and Mario games for too long. I will no longer afford Nintendo the forgiveness I refused to bestow on my FitBit. It’s time to do better Nintendo, or the Switch is going in the microwave as well. Don’t mess with me.

And look, I’m not trying to go to bat for Netflix exclusively. Hell, by the time you’re done reading this they will have announced another price hike and I’ll probably cancel it until they make some new MST3k episodes or something. I’m just saying I wish Nintendo wouldn’t confuse imitation for basic consumer expectations. I wish they wouldn’t insist on staying in their own lane, even when the other lanes are doing really cool things. I wish they’d add a third video app, frankly.

Wednesday’s Nintendo Direct saw a plethora of remakes and re-releases spanning Nintendo’s history, from obscure NES games to an update to Wii Sports that I don’t think anybody saw coming. Maybe one day they’ll run out of games to bring back from the last few Nintendo systems and we finally will get a Netflix app.

In the meantime, hopefully that Mario movie comes to Hulu eventually, because that’s the only way you’ll be able to watch it on a Nintendo Switch.