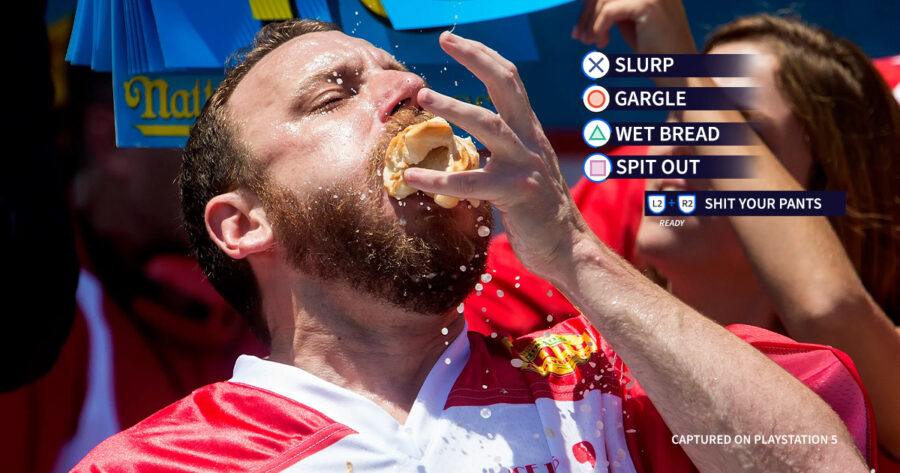 It’s the Fourth of July, which means it’s an algorithmically advantageous time to talk about things that only happen on the Fourth of July. Whether you’re celebrating the birth of the United States in 1776, or the original XBLA release of Spelunky in 2012, the spirit of tradition on this day is something that everyone observes in their own unique way.

…Which is why it’s an absolute travesty that, in 2022, there is still not a single licensed triple-A Major League Eating game where I can play as Joey Chestnut at the Nathan’s Fourth of July Hot Dog Eating Contest in a ray-traced simulation of Coney Island and watch him hork down 100 perfect CGI hot dogs in a row on my 4K 120HZ OLED TV.

How am I expected to feel patriotic in a world where this kind of inequity is still happening? It feels like something that other countries with food-and video-game-addicted populaces could have solved decades ago. If there were an annual hot dog eating contest in Japan to celebrate the majesty of the Edo period, we would currently be buried under a mountain of Japan-only eating contest simulators stretching as far back as the Famicom. (And, Nintendo would still be in the process of translating these games for Nintendo Switch Online at the rapid pace of one game per fiscal quarter.)

It’s not too hard to close your eyes and imagine a PS5 jewel case on the shelf at Best Buy showing a glossed-up photo of Joey Chestnut mid-chomp over a huge shining vector logo of MLE ’22. I didn’t mention that earlier, but I am of course imagining this as an annual Madden-style franchise. (If we’re going to spend millions of dollars doing motion-capture of random people speed-eating peach cobbler, we might as well plan to reuse them, right? Plus, there are new rookies to be motion-captured every season, just like any other major league sport!)

When someone finally does listen to my advice to build this revolutionary game, of course we’ll want to get proper license from MLE to use the likenesses of their players, venues, and approved foods, but beyond that we also need to examine the need for the most important aspect of any sports game: the custom character creator.

What good is any of this if I can’t spend my Fourth of July customizing a tall, gangly blue dude with cat eyes and a face tattoo to become a Major League Eating champion in a unique campaign storyline of his own? I want to be dropped into suburban Chicago as a local taco-eating champ and then rise all the way to the top!

Ideally, I think you should even be able to customize your characters’ teeth and tongue and then see simulations of their chomps-per-second like when you customize your engine in Gran Turismo. I think that’s how you break the competitive scene of this game wide open, and then boom, next stop is Evo. Bottom line, if you’re a video game developer who is reading this, you should close the browser and immediately start developing MLE ’22: Chew the Streets as your next game. (Just one idea for a subtitle, we can workshop other possible ideas closer to release.)

Of course, if there are no takers from the publishing giants of the world reading this, then I’ll just have to put together a team to build this game as a grassroots indie sensation myself. It wouldn’t be the first time revolutionaries with an unpopular idea banded together on the Fourth of July to change the world…