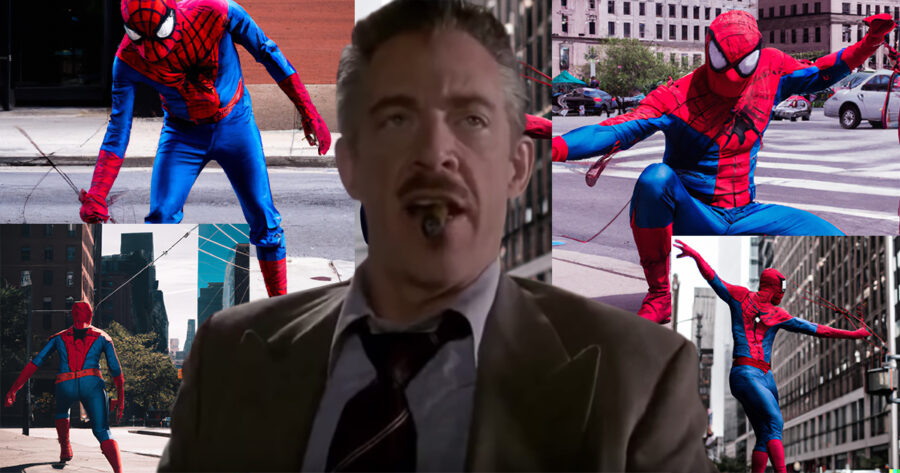 “Finally, I don’t have to rely on photo monkeys like that numbskull Parker any more,” Jameson said, his eyes locked on his browser window waiting for pages and pages of AI-generated photos of Spider-Man to unfurl before him. “Surely this small suggestion will be enough to produce the spitting image of that menace, I’ve finally got him! Infinite pictures of Spider-Man and they’re all mine!”

“I think Spider-Man has been doing a lot of good for the city lately, and that’s why there’s no real pictures of him doing anything bad,” explained Bugle editor Robbie Robertson. “Jonah’s been locked in his office DMing with teenagers in Kyrgyzstan all hours of the evening trying to get access to that AI thing. I’ve never seen him so excitedly take out his credit card before, it was really surreal. I guess that website must be pretty valuable but it feels unfair to Spider-Man.”

Readers of the Daily Bugle have been surprised by the avalanche of artificially generated and sometimes terrifyingly surreal Spider-Man photos that have run in the paper since Jameson’s experiment.

“Some of the photos in this Spider-Man cover story look like an acid trip nightmare,” said pizza chef Marylou Weaver, flipping through a copy of the Daily Bugle on her lunch break and sometimes recoiling in fear. “This one’s just a giant spindly-armed creature slinging giant webs onto terrified civilians with its horrific snout. What the hell is going on with that? I think I’m going to be up at night thinking about it, but it certainly makes the picture right next to it of Spider-Man punching an old lady in the face seem very realistic by contrast. What a menace that Spider-Man is!”

At press time, Jameson was reportedly haggling with DALL·E 2 to pay it fewer credits for each future Spider-Man photo it generates.