Man Awake At 2 a.m. Worrying If Window for Gex Reboot Has Closed 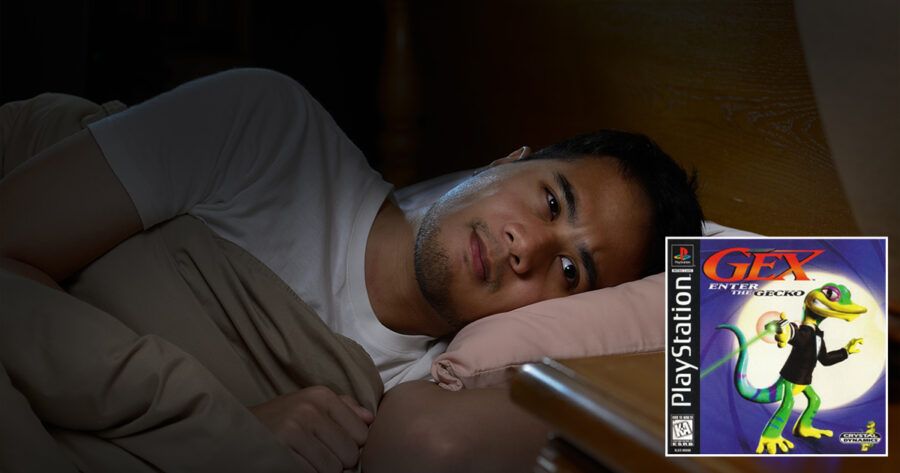 CLEVELAND — Local man Roger Breeding awoke in a cold sweat last night, unable to sleep after wondering if the window for a ‘Gex’ reboot had unfortunately closed.

“Oh God, what if it’s already too late,” Breeding pondered in his bed early this morning. “Sure, there was an ironic uptick in interest recently, but even that has almost petered out. It’s not too late, right? Right? They’re always digging up old intellectual property, so Gex could get that sort of treatment. I’d play it. Even if I was doing it ironically, I’d play it. But there has to still be sand left in the hourglass before a reboot is completely out of the question. Although if it didn’t happen when Gex became a meme online, then when would it happen? That’s it, I’m making a pot of coffee.”

“Gex would have so much to say and comment on now that the internet is a big thing,” he thought to himself. “I wanna know what Gex’s take on our current society is. Surely, others do too. Oh man, are we never gonna find out? Are we never going to learn what puns Gex would have to say about social media or the Marvel movies?”

Breeding reportedly sought the counsel of his wife in this trying time for him.

“Sweetie, wake up. Wake up!” Breeding said, shaking his asleep wife’s shoulder. “Don’t worry, it’s just me. Yeah, I know what time it is. Do you remember Gex? He was a gecko version of James Bond who would reference celebrities from the ’90s. Yes, yes, the kids are fine, are you paying attention? Gex was an alright game but I can’t tell if he’ll get a reboot. It’s been enough time to warrant one, but I’m worried it’s been too long. Baby, where are you going? Why did you already have a suitcase packed?”

At press time, when asked for comment as to why he started thinking about Gex in the first place, tuxedo-clad Breeding replied simply, “note to self: don’t drink the tap water at Jerry Garcia’s house.”