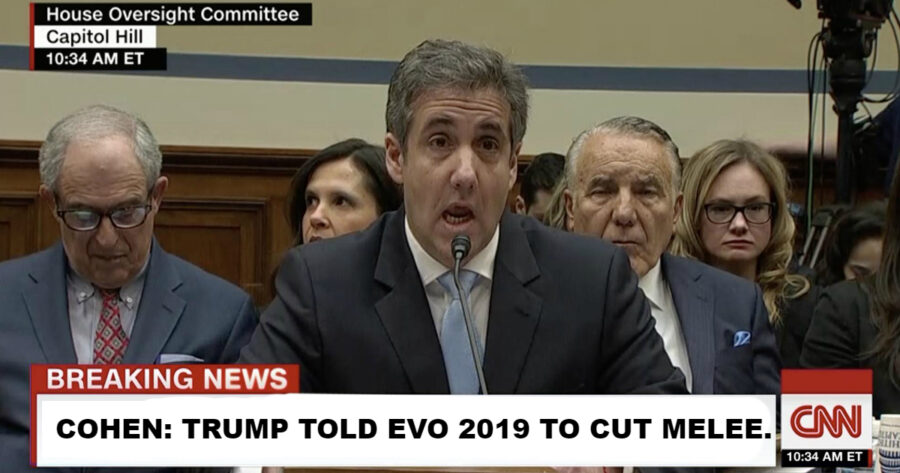 WASHINGTON — While testifying in front of the House Oversight Committee, President Trump’s former attorney Michael Cohen revealed that it was Trump himself who issued the orders to remove Super Smash Bros Melee from the EVO 2019 line-up.

“I once said that I would take a bullet for [Trump], but I cannot stand idly by while our Head of State commits these atrocities,” Cohen said to a tense Congress. “Mr. Trump is an enigma. An enigma that is very upset that people continue to enjoy playing and watching an 18-year-old video game.”

According to Cohen’s allegations, Trump becomes visibly angry whenever he sees an image of Fox McCloud, one of the popular “spacie” characters often picked in high-level Melee. “He’s a conman, a cheat, and he’s bitter that he’ll never get to see Hungrybox and Mew2King battle on PokéFloats with items on,” Cohen continued. “Trump claims to have done years of research on this, it was one of his primary goals to end Melee since he started his campaign. In fact, he has stated many times that he believes Brawl is the definitive version of the game because it’s just ‘more fun and fair.’”

Weighing in on the situation on his Twitch stream, top Melee player Mang0 shotgunned a Bud Light before shouting, “The Three-VO is dead, fuck! Yeah I’m upset, but Armada won’t get his either and that kind of schadenfreude keeps me going. Fuck yeah, USA! USA!”

At press time, Cohen revealed that President Trump also attempted to influence the election of Smash Ultimate Summit to make sure no Melee players made it into the event.