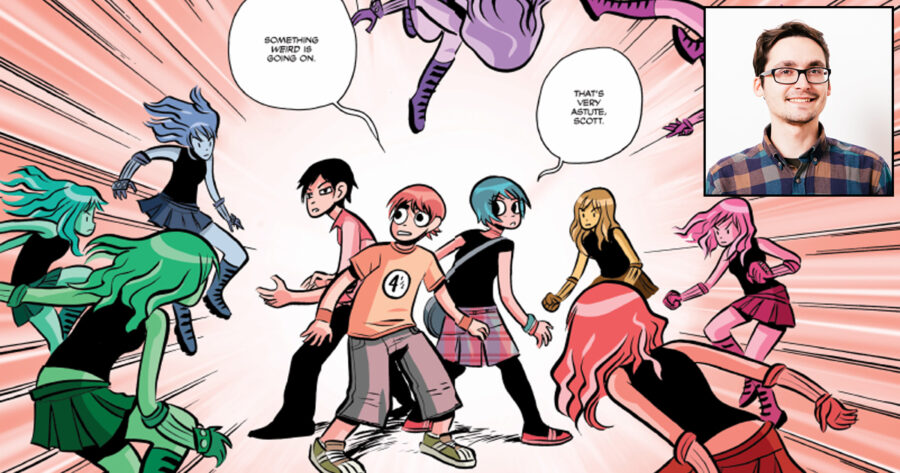 Do you love comic books? Here are the top five Scott Pilgrim quotes you can expect that unassuming “male feminist” rocking a Mac DeMarco shirt to use in your relationship to hide his manipulative behavior!

One of the girls who “broke his heart” smoked weed and because he never processed that breakup he is now going to take that out on you. Every time you light up, he’ll lay this iconic Scott Pilgrim quote on you, before guilting you for doing something that has no impact on him. But hey, he’s probably harmless!

He doesn’t have anything against fat people, he swears. He’ll tell you he doesn’t care what your body looks like, but when you reach for another piece of garlic bread, he’ll bust this bad boy out with a grin on his lips that betrays the judgement in his words. Enjoy digesting both those things the rest of the day. It’s just a funny reference, stop freaking out about it!

OK not Scott Pilgrim, we know — we just stuck this one in here to communicate that this guy is a pop culture polyglot, capable of defending his shitty behavior through a variety of references. We once saw him quote Bojack Horseman to get out of tipping a waitress. A real Renaissance Man.

Any time he says or does something that keeps up his facade of being understanding and emotionally in tune with himself or others, he’ll expect you to swoon. When you don’t, he feels attacked. Like a spurned puppy, he’ll sulk. He isn’t used to not being praised for having emotions. This confuses and angers him. Expect a snarky quote in response that belittles you for being a cold hearted bitch.

Like this one! While you might think this sounds harmless, you’ll be singing a different tune when you point out how much “emotional labor” you do for him after he refuses to see a therapist, again. If Marx didn’t talk about it, neither will he.

But hey, what can you expect from a guy who thinks that Scott Pilgrim — a guy who dated a high schooler as an adult and cheated on her — is a hero? Hurray for pop culture!