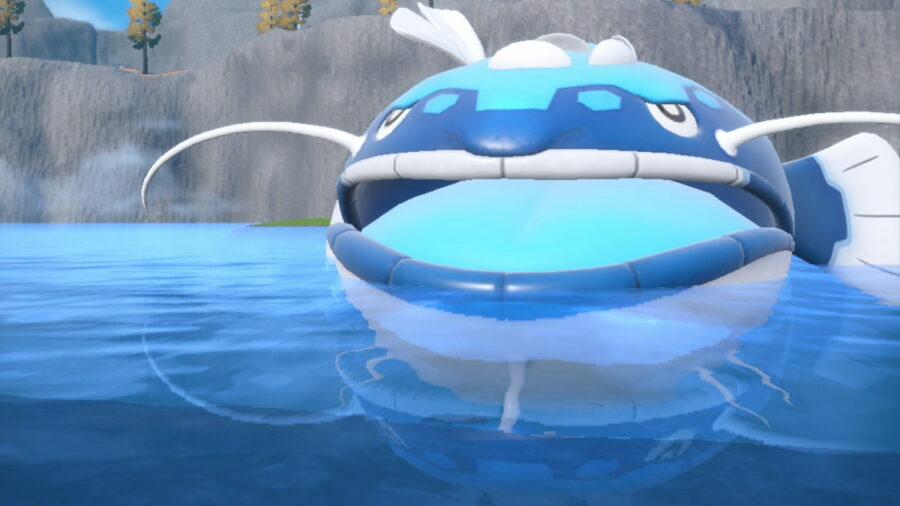 Pokemon Scarlet & Violet has an overwhelming number of creatures to catch both late & early in the game, 400 Pokemon to be exact. So choosing a team of just six can be the toughest challenge in the game, especially with this much choice and freedom of movement.

You can’t go wrong, no matter what Pokemon you choose. But some of Scarlet & Violet’s toughest challenges come later in the game, so you’ll want powerful Poké-friends to help you along. If you’re having some trouble in the late game, no problem. We’ve compiled a list of the best, most powerful Pokemon in Scarlet & Violet‘s late-game.

If you’re just starting out in Paldea, take a look at our best early-game Pokémon list. 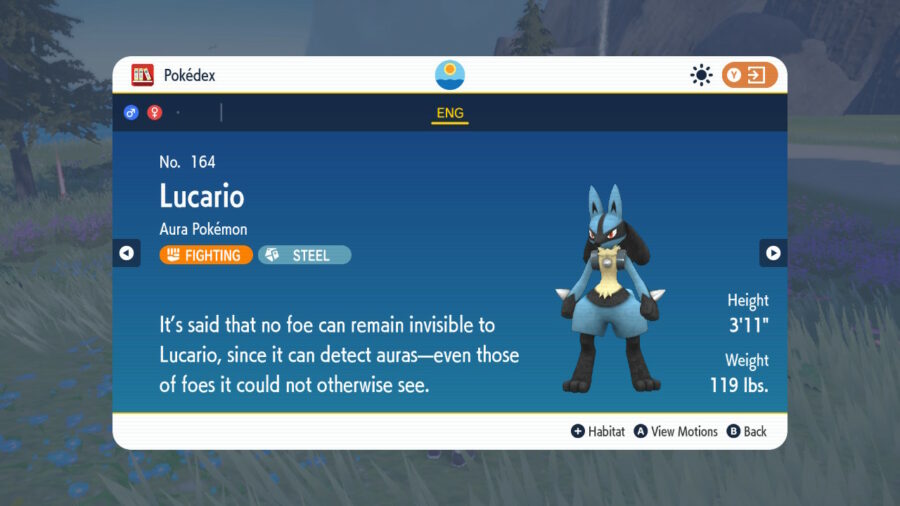 Lucario is usually the best fighting Pokémon in the games it appears in, and Scarlet & Violet are no different.

Lucario evolves from Riolu, which you can catch early in the game in South Province (Area Two.) Riolu can evolve when it reaches maximum happiness. To increase a Pokémon’s happiness, set up a picnic and wash, talk and play ball with your Pokémon. Once Riolu’s at maximum happiness, it’ll evolve the next time it levels up.

As a fighting/steel-type Pokémon, Lucario is strong against plenty of rock-type Pokémon that you’ll likely find in Scarlet & Violet’s late-game caves. However, Lucario’s biggest strength is its varied move pool. Dragon Pulse, in particular, is a great move for Lucario to learn as it’s super effective against the many dragon-type Pokémon that are abundant later in Paldea’s adventure. With the high attack, special attack, and speed stats, you can’t go wrong with a Lucario in your roster. 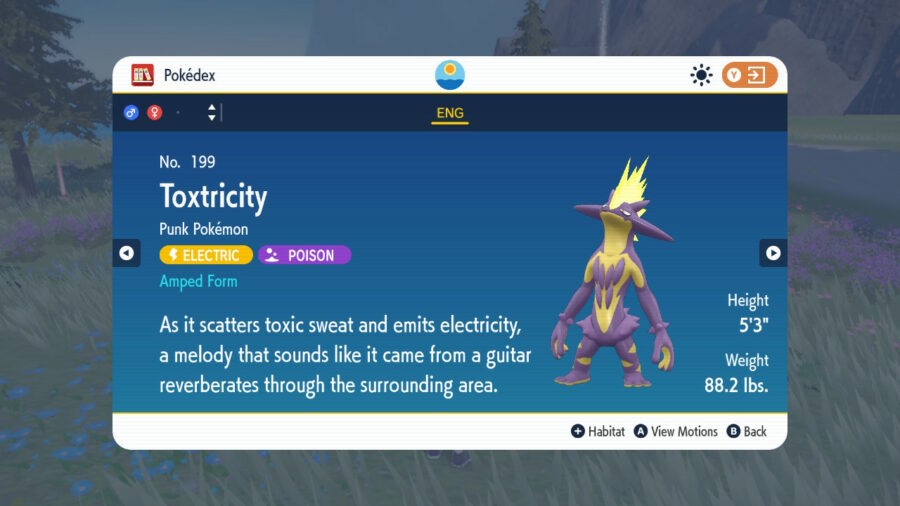 Paldea is full of powerful fairy and flying-type Pokémon. It wouldn’t be too outlandish to suggest that these two types dominate many areas of the region. Thankfully, Toxtricity is a powerful electric/poison-type Pokémon capable of dealing with these threats.

Toxtricity evolves from Toxel, which can be caught in South Province (Area Four), although you can find a wild Toxtricity in one of the game’s later areas, Alfornada Cavern.

Toxtrcitiy’s typing is its biggest boon, easily dealing with the fairy and flying types that Paldea is overflowing with. However, Toxtricity would still be a solid pick, even if Paldea wasn’t stuffed with these types. Toxtricity’s attack and special attack stats are very good, and its Punk Rock passive ability makes its sound-based moves even stronger.

Many of Toxtricity’s abilities can also cause paralysis and poison, naturally. This makes Toxtricity an excellent fighter for longer battles and can also make it easier to catch the tough Pokémon in the late game. 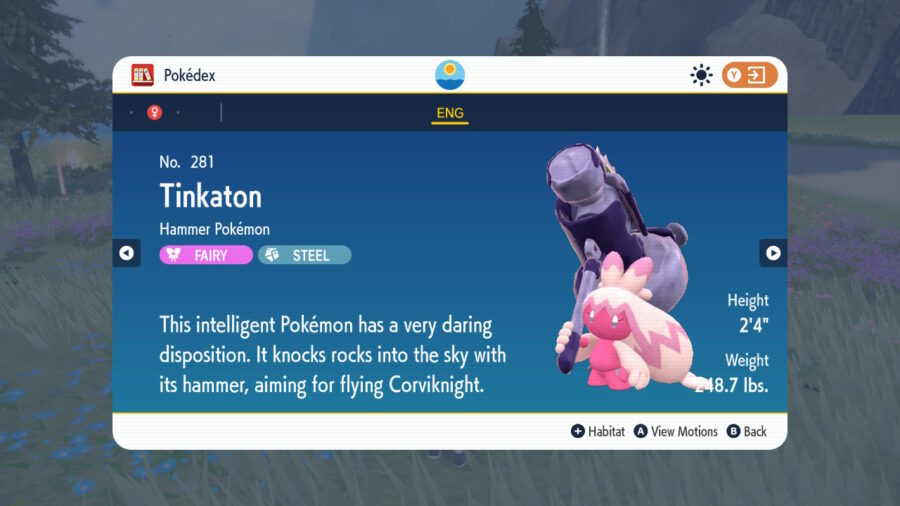 Tinkaton is the final evolution of Tinkatink & Tinkatuff, which can be found as early as South Province (Area Two), just under the river. They can evolve into Tinkaton by level 38.

Tinkaton has very good typing as a dual fairy/steel-type Pokémon. One of the only weaknesses of a fairy-type is steel, so Tinkaton’s typing mitigates this weakness. In fact, Tinkaton is very strong against many typings, including dragon-types, which will help you against the Elite Four.

Apart from an interesting typing, Tinkaton is the only Pokémon with access to the Gigaton Hammer, the steel-type move. Gigaton Hammer deals a huge amount of damage and can quickly one-hit kill many enemies. Plus, during picnics Tinkton sleeps on its massive metal hammer. Cute and powerful!

Dragonite: A Strong Pokemon For Late In Scarlet/Violet 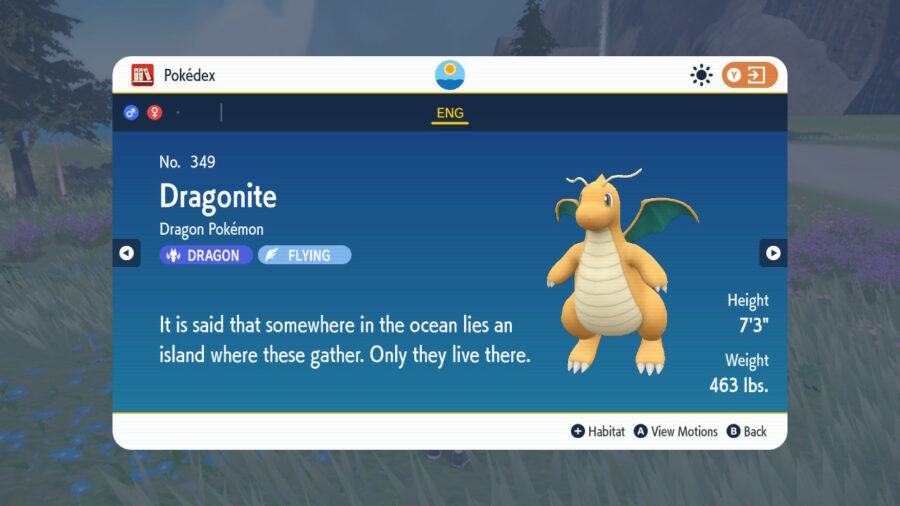 Dragonite is a classic dragon/flying-type Pokémon that has been a part of the series for generations. It returns in Scarlet & Violet and is just as useful in this game. You can find Dragonite’s predecessor, Dratini, in Casseroya Lake. You might need the ability to swim, and be prepared, as most Pokémon in this area will be Level ~50.

As a partial flying-type, Dragonite will be resistant to many ground-type Pokemon & moves you’re likely to encounter in the late game and Elite Four. It also has great move coverage, as it can learn moves of several different types, allowing you to adapt based on the present challenge.

Dragonite has an incredible attack, special attack, and special defense stats, with its only Achilles heel being its 4x weakness to Ice. Its base stats sit at a total of 600, making Dragonite an incredibly versatile and powerful Pokémon to have in your party. Also, I love the way it smiles as it rampages through enemies. Adorable. 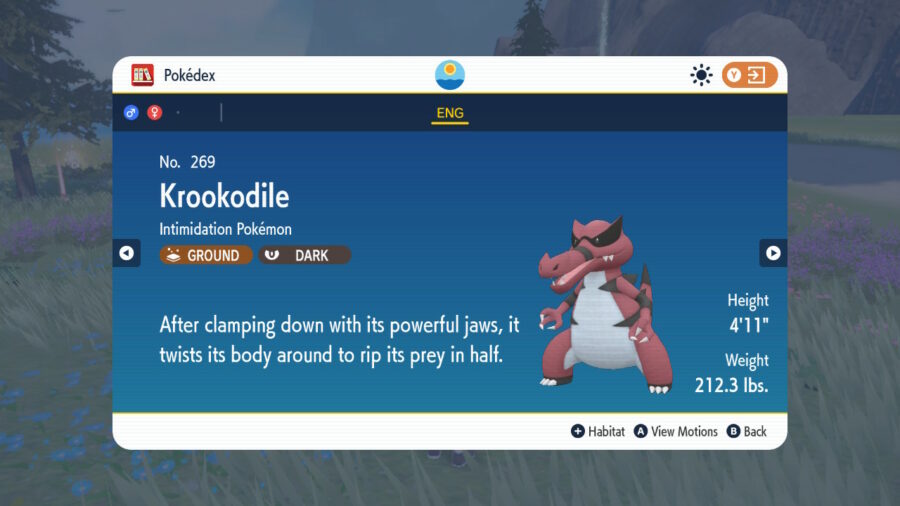 Krookodile was an awesome Pokémon when it debuted in Black & White all those years ago, and it’s still a powerful fighter in Scarlet & Violet. Krookodile is the final form of Sandile, which can be found all over the Asado Desert. It evolves into Krokorok at Level 29, and Krookodile at Level 40.

Krookodile’s main selling point is its ground/dark typing, giving it significant coverage. In addition, Krookodile’s dark-type moves will make the high-level psychic and ghost gyms a breeze. Altogether Krookodile is strong against seven different typings, meaning there aren’t many areas where it’ll be useless. Combined with its strong offensive stats and high endurance, Krookodile is arguably the best ground-type Pokémon in Paldea. 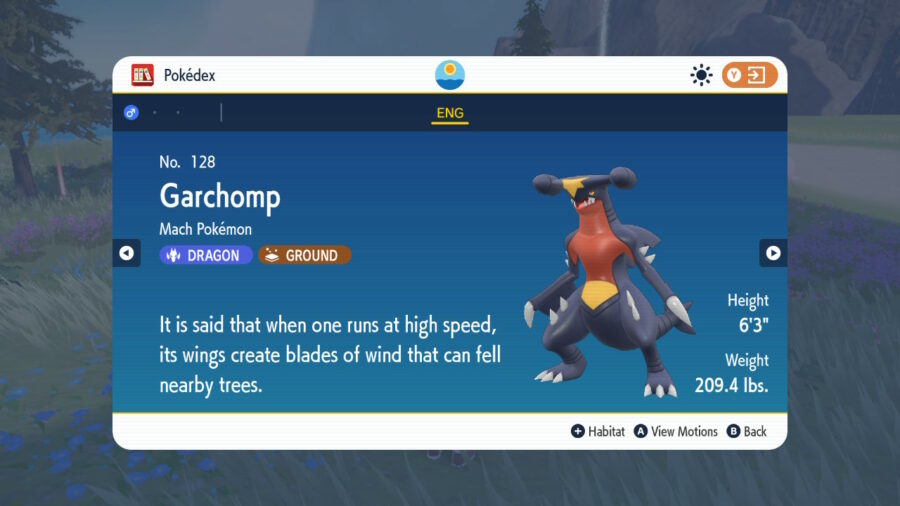 Garchomp has been a fan favorite ground/dragon-type Pokémon ever since Diamond & Pearl was first released, and its inclusion in Scarlet & Violet hasn’t diminished its usefulness. Garchomp is the final evolution of Gible, which can be found in many caves throughout Paldea. Notable locations include South Province (Area Six) and West Province (Area One.)

Like most dragon Pokémon, Garchomp boasts some great stats that are helpful in every situation. However, Garchomp’s type combination is the true gem here. As a dragon-type, Garchomp has several resistances, and as a ground-type, Garchomp is super effective against five different types. This makes Garchomp a well-rounded pick for any team. 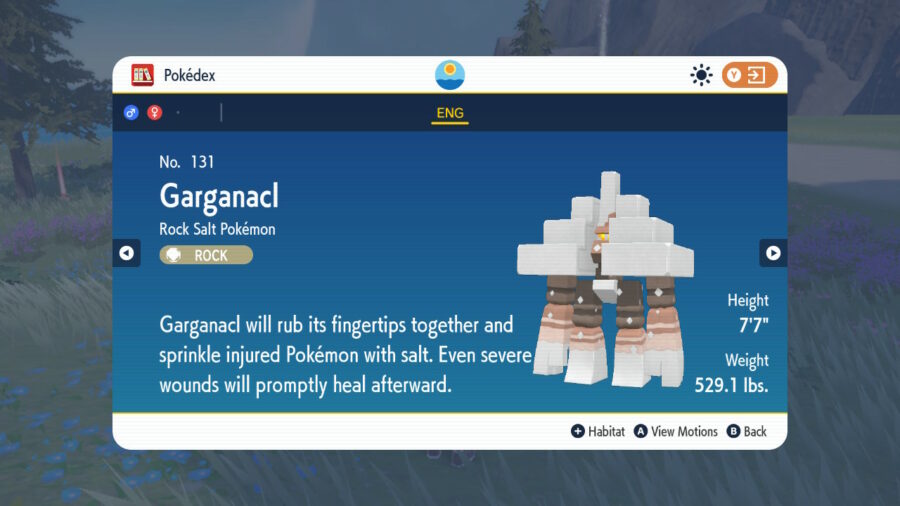 Garganacl is Scarlet & Violet’s premiere rock-type Pokémon. It’s the final form of Nacli, who was featured in our best early-game Pokémon list. This means you can catch Nacli at the beginning of your journey and train it through the credits. Nacli can be caught in several early game areas, including South Province (Area Three). You can also find the middle evolution, Naclstack, at South Province Area Five & West Province Area Two. It will evolve into Garganacl at Level 38.

As Generation IX’s featured rock Pokémon, Garganacl naturally has incredible defensive capabilities, even if its speed is a little low. In addition, Gardganacl’s rock-typing can be a lifesaver when it comes to the endless crowds of ice Pokémon in Glaseado Mountain. Finally, Garganacl’s signature ability makes it a must-have Pokémon. Salt Cure takes 1/8th of an opponent’s maximum HP every turn. Salt Cure also does double the damage to water and steel types, meaning Garganacl can still be useful against types it’s weak against. Overall, Garganacl is a solid choice if you’re looking for a resistant tank by your side. 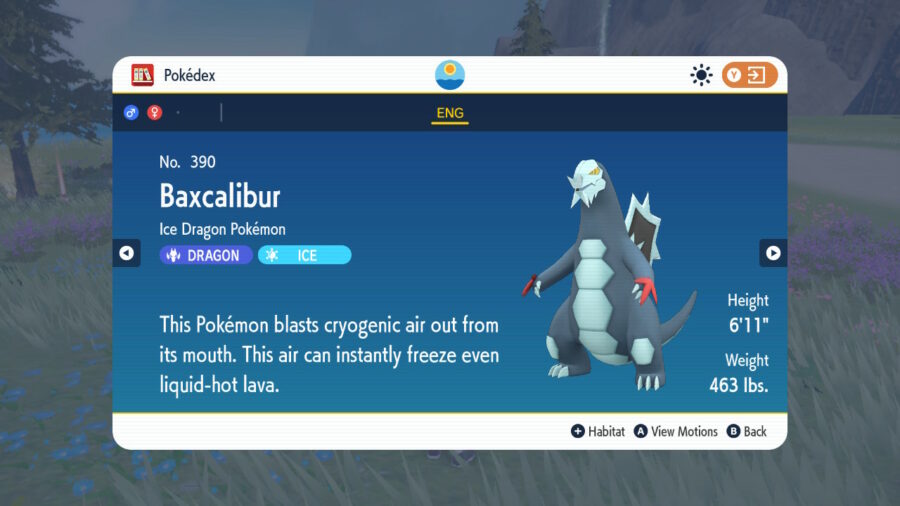 Ice-type Pokémon have traditionally been slightly underpowered and defenseless since their introduction, with only a few resilient icy Pokémon. However, Scarlet & Violet definitely fixes that problem with a handful of new, mighty ice-type creatures. Leading the charge is Baxcalibur, an ice/dragon-type that looks like a riff on Mecha-Godzilla.

Baxcalibur is the final form of Frigibax, which can be found in multiple parts of Glaseado Mountain. Frigibax is a rare Pokemon, so you might need to wander around before spotting one. If you want to increase your chances of finding a Frigibax, you can always make a Great Avocado Sandwich or buy a Escalivada from Go-For-Broke-Grill since they will make dragon-type Pokémon appear more frequently.

Baxcalibur has a very high attack stat and a base total of 600, making it a powerhouse fighter in nearly all scenarios. An ice-type Pokémon can be convenient in the late game since the Elite Four consists of many flying, ground, and dragon-type Pokémon.

Dondozo: A Tank To Round Out Your Late Game Pokemon Scarlet & Violet Team 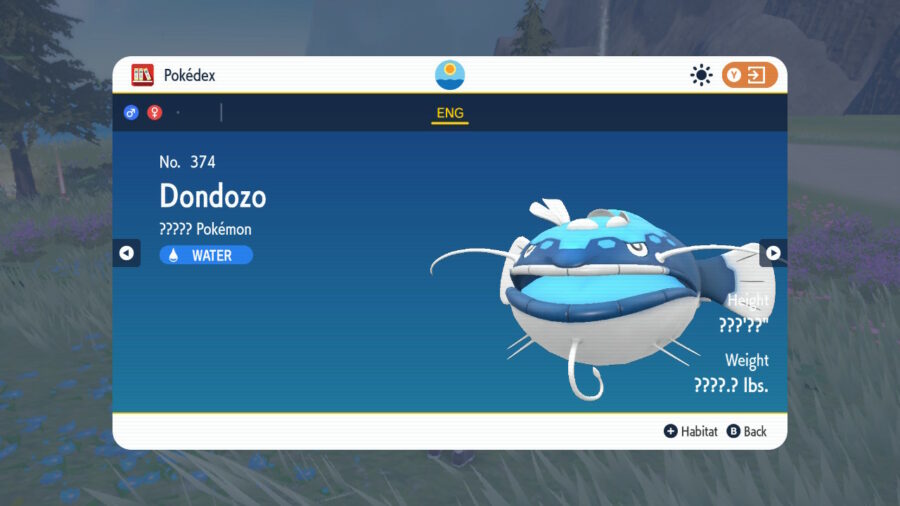 Powerful water types are rare in Paldea; it almost feels like Psyducks and Buizels run the region’s ponds and rivers. But late in the game comes Dondozo, an absolute tank that can be found roaming the Casseroya Lake.

Dondozo is best used against a type it has no weakness against. As a result, it won’t be under any threat of defeat, and its versatile moveset will likely contain a super-effective attack.