Rule the roost with blood and steel. 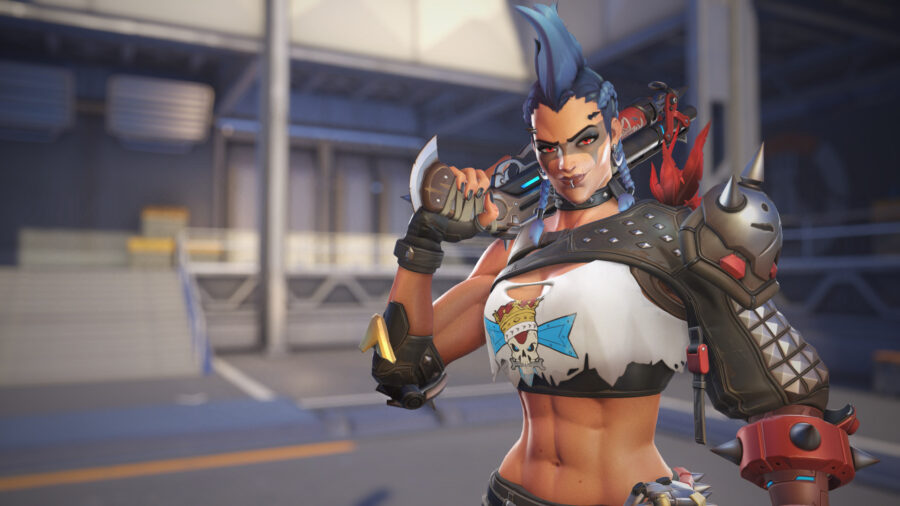 Junker Queen is the first new Tank added to Blizzard’s partially-new game, Overwatch 2. In the lore, she fought hard to become the ruler of Junkertown, a Mad Max styled grunge pit from a post-apocalypse that only affected Australia for some reason. Her playstyle is appropriately brutal, similar to a Barbarian or  Warrior from other Blizzard games. She hits hard at close range with added bleed damage, and can support her team by yelling. Here’s how to use Junker Queen to crush the weak. 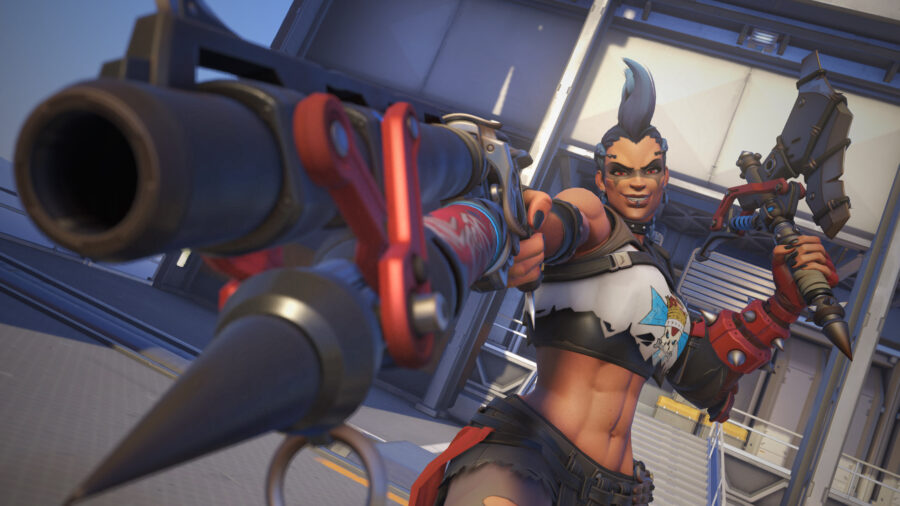 Junker Queen wants to kill, and nearly all her moves revolve around this. For a tank, she has very little team defense ability.

Adrenaline Rush (Passive): Several of Junker Queen’s abilities cause the “Wound” effect. In any other game this would be called a bleed effect, but maybe Blizzard doesn’t want blood spraying out of their characters to increase the ESRB rating. Or maybe they just want it to stay consistent when used on robots. Wound does damage over time, and this passive causes each active Wound to heal Junker Queen for each point of damage dealt! This is her main survivability mechanic, and different types of Wounds can stack on a single target.

Scattergun (Primary Fire): Junker Queen’s default attack is a big ‘ol shotgun. Its spread isn’t as wide as Reaper’s shotgun, so it works well at medium range as well as close up. In exchange, it only has 6 shots and a lengthy reload time. A direct hit with all the shotgun pellets (easy enough with its narrow spread) does 80 damage.

Jagged Blade (Secondary Fire): Junker Queen flings a knife forward in an arc. This can travel farther than her shotgun attack, but takes more aim and better timing. Anyone who gets hit takes 80 damage, same as the shotgun, but also receives a Wound, causing 15 damage over a few seconds. She’ll heal those 15 points thanks to Adrenaline Rush, but it’s a teeny tiny heal, so this move is better used for damage and setup than self-sustain.

The knife has an additional magnetic property. It sticks wherever it lands, and after a few seconds, it returns to Junker Queen. Right-clicking returns the knife right away, but recalling it early doesn’t affect its 5-second cooldown. The recalled knife applies Wound to enemies it passes through on the way back. It’s possible to throw the knife behind a chokepoint, then call it back to Wound several targets at once. That’s crap for damage, but the Wound heals stack if you need a little boost.

Also, if the knife is stuck in an enemy from a direct hit, pulling it back drags the enemy towards you. It’s only a short pull, like a miniature version of Roadhog’s chain, but it can bring an enemy into shotgun range. Knife > Pull > Shotgun does about 175 damage total, enough to bring most non-tanks near death. A truly skilled Junker Queen can let the pull trigger automatically, dragging the enemy into a prepared Carnage attack!

Junker Queen even uses the knife in her regular melee attacks. If the knife isn’t deployed, her strike will apply the 15 point Wound on top of the normal 30 melee damage. It’s not much, but it might make the difference in a close fight.

Commanding Shout (Ability): This is Junker Queen’s team defense skill. First of all, it gives her an extra 200 health (for five seconds) on top of her normal 425. It also gives all her allies within 15 meters an extra 50 health (for three seconds). Lastly, it buffs Junker Queen’s move speed by 30%, along with any of her allies in range (for five seconds). This is the first area move speed buff since Lucio at Overwatch’s initial release! The extra health is the most important part, but the buff is pretty light for her allies.

Carnage (Ability): Junker Queen’s best attack. A big cleave with her axe, hitting everybody within 5 meters in front of her for 90 damage AND a Wound worth 40 points. That’s 40 points of healing per target! Junker Queen’s gameplan should revolve around getting huge Carnage hits, then finishing off the survivors. Carnage followed by a shotgun blast deals a total of 210 damage, which will kill most non-tanks outright. Its weaknesses are its range, its 8 second cooldown, and its windup: it takes a full second after pressing the button to swing the axe. Proper spacing and timing is essential to get big cleave damage.

Rampage (Ultimate): A magnetic whirlwind of weapons, launching Junker Queen forward and hitting all enemies she passes. The initial hit does no damage, but it applies the biggest Wound of all: 100 damage over five seconds, all of which comes back as healing for the Queen. This Wound also includes a bonus effect: victims can’t heal! Using this Ultimate on an enemy team reliant on heals can completely shut them down, especially if your teammates follow up. But if they don’t, you’re in a bit of trouble: this move can send Junker Queen way out of position. And don’t forget, since there’s no contact damage, it won’t do a thing to enemy shields. 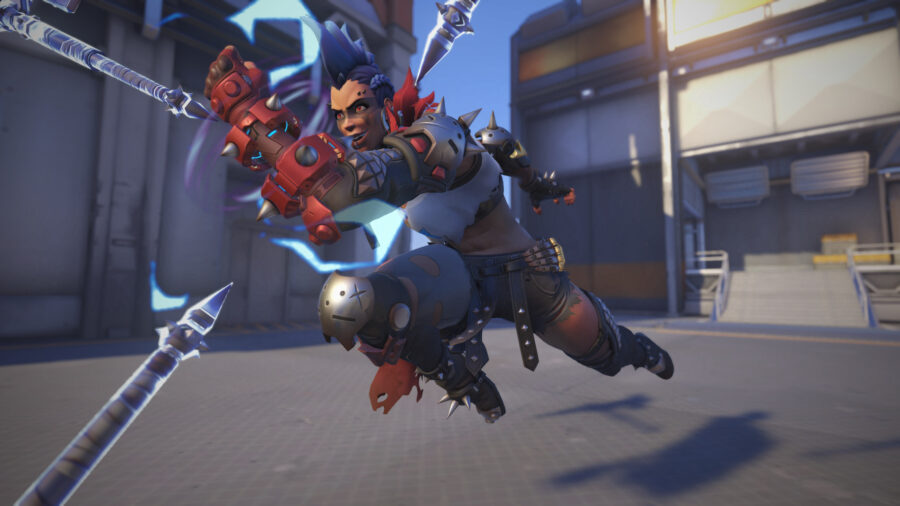 Junker Queen is an unusual tank for Overwatch. Rather than using shields or armor, she relies on life-stealing effects from her various Wounds. Her direct team support is limited to a five-second movement buff, and a three-second team health boost of 50 points. In her current form, this makes her hard to use effectively. She relies on hitting multiple enemies with a Carnage cleave, but if the enemies back up a little bit and she misses, she gets no healing and is now standing in front of multiple enemies with guns.

Her strength is her high damage output. Several combinations of her abilities can kill low-health classes in an instant. Striking with Carnage from behind can devastate a whole enemy team grouped around an objective. This puts her in an odd position, however, since that’s typically the job of a flanking DPS hero, not the frontline tank.

Timing her Commanding Shout, the other main piece of her moveset, is critical in making the most of her abilities. Shout first, and you can outrun the enemy to keep them from evading Carnage. Shout mid-fight, and you can use the temporary health boost while healing from Wound damage that would be wasted if your health was full.

Her weakness is her range. If she can’t hit the enemy with Carnage, she can’t do decent damage OR heal herself. Her greatest enemy is anyone with a gun on a ledge above her – and many, many characters are capable of this. That’s not even counting heroes with flight, like Pharah or Echo! She may be able to pull enemies off ledges using a well-timed knife throw, but that’s no guarantee. In short, Junker Queen is great at brawls on a control point, but terrible at advances through rough terrain. Consider the current stage carefully.

Since she has little natural armor, Junker Queen will be much more effective with a dedicated healer looking out for her. A good team setup for Junker Queen could be a mobile group that sticks together. Teaming with Lucio makes a lot of sense: if the whole team stays near the two of you, you’ll all be a lot stronger and faster thanks to his area heals and your Commanding Shout. It’s probably a good idea to have at least one DPS who can fight well at range, too.

In the Overwatch 2 beta, Junker Queen dominated the tank meta for a long time. Much of this was based on her Commanding Shout, which was originally twice as potent on allies with a greater duration. At launch, however, it seems Blizzard may have overcorrected. Our analysis of current Overwatch heroes suggests that Junker Queen isn’t the most reliable tank at the moment. In a game this new, of course, balance changes come quickly, so keep an eye on the patch notes: if the pendulum swings back, Junker Queen may reclaim her throne.

These are Junker Queen’s available skins:

The Beast Hunter skin is not purchasable, instead being unlocked at level 40 of the premium battle pass for this season. The Actinium skin is purchasable, but includes this information: “Available through a regional promotion. Available in Hero Gallery starting November.” What does that mean? We’ll find out… together. Basically, don’t buy it yet.